DBMM solo game today using Gok Turks vs Early Byzantine.
Byzantines invaded and so not much in way of terrain. Simple advance to contact game with Sogdian allies of Goks hitting Byz CvS and losing (the + & - 1 when losing in Byz turn done for the KnF) with only 2 Cv dieing.
Skutatoi with Ps support pretty solid vs Cv especially as only 1 rank of Bd die (the -1 for I cost them a couple of times) and they killed the Gok CiC !!
Hun allies of Byz dealt with Gok CvO in short order.
On Gok right an indecisive Lh battle occured.
Loss of Cic big block on Pip for Gok and lead to their being whittled to broken status which along with broken Sogdians brought defeat to their door................
Byz had one Cmd disheartened 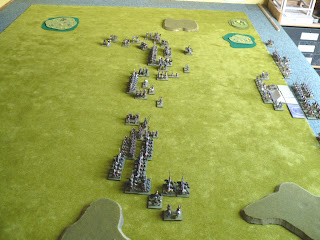 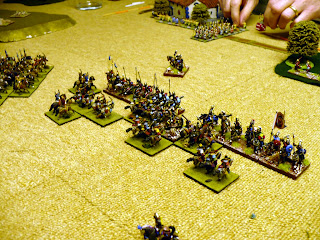 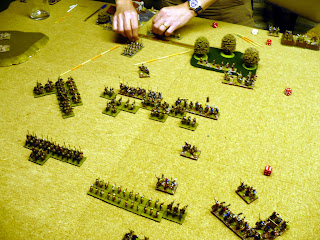 Played a DBMM game today 400pts with my Central Asian Turks (Gok) vs Stephens Early Byzantines
As ever my off-table troops (Delayed Cmd) failed to arrive in this game and my Sogdian Allies were shattered in mean-time. Gothic Knights QKd several Gok Nobles causing a large Cmd to break and therefore the army.
Pretty good game overall with much less discussion of rules interpretations (with exception of Repulses).
Now if I could only manage a win....................................... 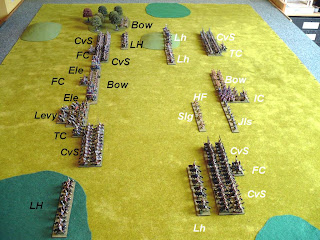 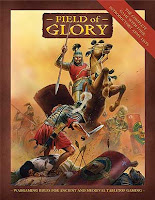