I used Eastern Franks to try out revised list with KnO post 1085ad Stephen used Ghaznavids with brilliant Gen. Fairly non-descript terrain (One large DH towards centre) KnO lasted a bit longer than their KnF cousins but still beaten eventually by CvS. Elephants were on flank march but never featured.
Franks narrowly beaten (and sooner than they should have been due to my mistake with MEs).
Big discussion ref single element moves which we now think should be in one single direction and straight only. 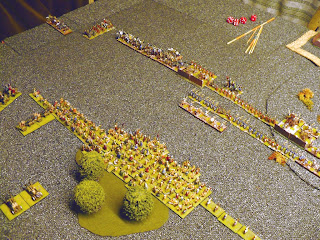 Gallic vs Marian Roman
400pt game today with Stephen I used Gauls vs his Romans.
I invaded and terrain saw a huge (2FE) difficult hill plonked in Stephens middle zone, a couple of small woods and two small rough hills with a Paved Road completed battlefield.
Stephen deployed first with a line of Legionaries (a mix of BdS & BdO) supported by fortified Bolt-Shooters with flank resting on the DH and other flank supported by Cavalry and Light Horse with a few more Legionaries. The DH was occuppied by Psiloi and Auxillaries. I deployed 2 Allied generals with a large central Cmd (40 Wb with Ps and Lch support) and to rear a Cmd of Cavalry and Chariots to sweep around my left flank (on table). My warriors were all WbO.
Opening moves saw repective mounted Cmds move to flank and Legions and Warband approach each other. Thankfully both my Allied Cmds were reliable.
Roman Art caused a few losses. Hostilities began in earnest when BdS moved in against my central Wb Cmd (as they were a somwhat disrupted group due to sponno moves). Wb took a couple of losses but in their turn detroyed several Elite Legionaries. My mounted Cmd had poor Pips allowing oppossing Roman cmds to deploy unmolested against one Gaul Allied Cmd.
The key matchup in the centre saw the Legions in bit of distress nearing Disheartened status, with Gauls suffering losses but due to only counting 1/2ME per loss nothing too dangerous. Indeed things looked very good for the Gauls.....................until.......................with Romans tetttering on the brink the Gauls had 5 key combats in their OWN turn with each being 3 to 2 in favour of Warriors and quick kills looking almost assured ....................BUT !!!!!!!!!!!!!!!!!!!.......... with uncanny dice rolling managed to lose 4 out of the 5 combats and indeed lost 4 elements !! (my rolling 1 to Stephens 5 or 6 each time) the Romans then followed up and in their turn quick-killed several more Wb for no loss causing the central (CiCs) Gallic Cmd to break !!!!!!!
In the meantime the Allies had assaulted the DH with a to and fro battle uphill against Aux and Ps. On other flank my Cavalry and Allied Wb were dealing well with Roman horse but rather rashly I put an Allied Gen in his Chariot into melee and of course he ended up overlapped on both flanks and died, this broke his Cmd and tipped balance with Gallic army being routed.
Game hinged on that key turn when Gauls failed to win in their own bound as if they had of either killed some Romans or managed not to die against the battle was theirs...................but alas not to be.
This is closest I have come to actually winning a game but yet again my dice rolls let me down at crucial juncture.....................the Dice Gods hate my guts !
Still another superbly fun game with lots of exciting die rolling contests. Dbmm has not thus far failed to be anything but fun for us. Of course neither of us have used Spear armies yet !! 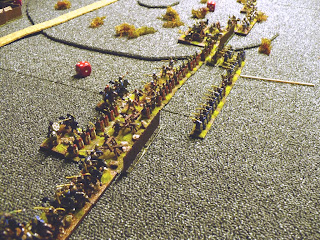 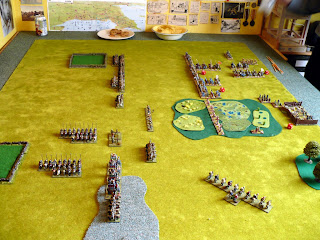 Sassanid Persian (moi) vs Sui Chinese (Stephen) Dbmm 400 pt game today
Interesting terrain set-up (Sui invaded) saw a large marsh area in centre of Chinese deployment zone. I deployed first in basic linear fashion. Chinese then deployed with all of their troops on one side of marsh. This left bulk of my Clibinarii and Elephants (4 elements) facing thin air and a single Cmd to face the Chinese onslaught. Irr CvS showed their manovering Ineptness (not helped by poor Pips) taking ages to drift to flank.
Thankfully my LhF Vassals managed to kill some opossing LhF and then hold for a few turns. Chinese Cataphracts however overran my CvO/S and broke my left flank. My Centre and Elephant Cmd were (slowly) redeploying but the Elephants suffered 2 losses to Artillery (oouch) before one behemoth managed to kill some BwX. Persian losses were mounting and things looked bleak. However my Arab Nomad ally had moved forward and engaged the enemy Baggage in their TF. Several turns of recoils then 2 Spent LH were followed by the Nomad General breaking into the baggage camp with another element breaking the enemy Army Baggage and putting pressure on all his Cmds. But.........isnt there always....................by this time the Chinese had managed to flank my other Cmds and the Cataphracts killed a couple of Cvs and another Elephant succumbed to enemy Psiloi. Then to seal the deal one of my Sub Generals was flanked and quick-killed by a cataphract so breaking another Cmd and ending the game (17-9)
Another enjoyable game with a lot less problems encountered in rules (other than couple of mistakes we made ref Pips) as always were totally forgot about Pressing Forward rules !! 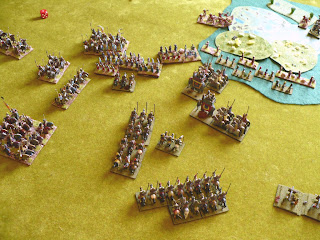