Played a game of CC Europe with son today using the Commando School scenario from original game set. I played as Russian defenders against Germans.

Great game with this ever excellent board wargame.

Things swung to and fro with usual excitement engendered by random events and card play.

Germans simply ran out of time as game ended on first sudden death roll just as they were putting pressure on main building objective, this gave Russians a VP win. 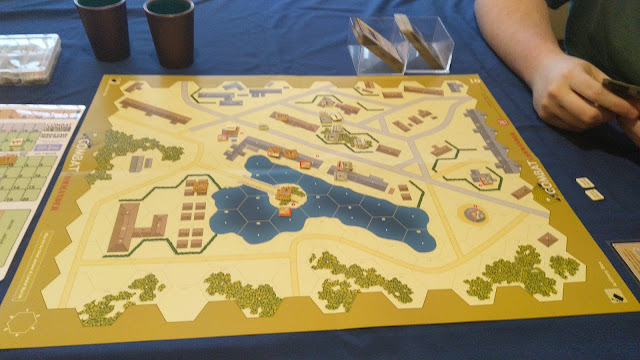 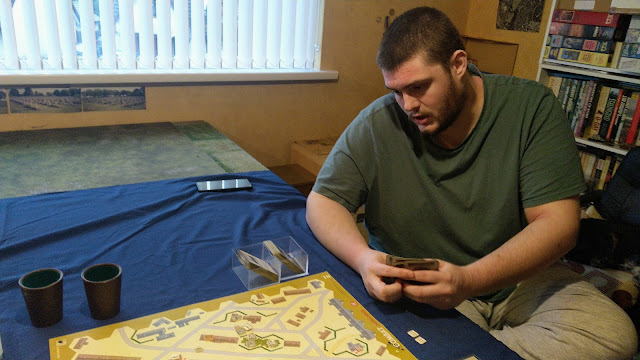 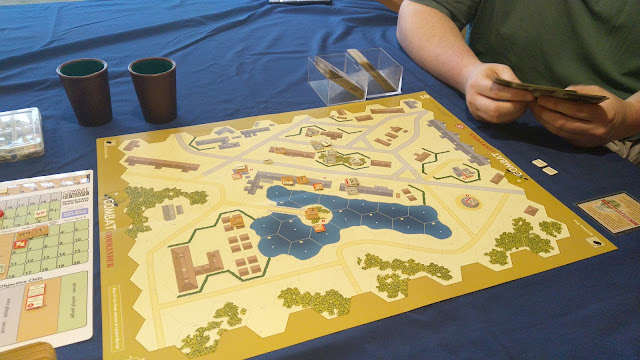 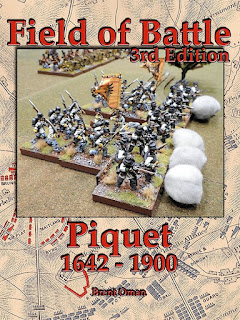 Played a quick game of FOB3 with my son (who thankfully got home for Christmas this year) using SYW kit.

Used one of the Seasons of Battle terrain cards to set up table and just selected a force of Russians (22 units in 5 Brigades) and Prussians (17 units also in 5 Brigades), I commanded the Prussians.

Prussians had a superior deck and better leaders (with an additional Move card) whilst Russians had an average deck (and an extra Melee card).

Game was a fast and furious blood soaked affair.

Russians lost 7 units to Prussian 3 but did inflict a steady drain of hits on Prussians.

Both sides ran out of Army Morale at virtually same time but Prussians pulled 2 Army Morale cards in a row and failed to stay on the field on second morale roll.

The game was great fun with lots of incident including Prussians losing 2 commanders in one turn which stymied their temporary advantage.

FOB is so very easy to teach and play.

Table set up prior to deployments from Prussian perspective 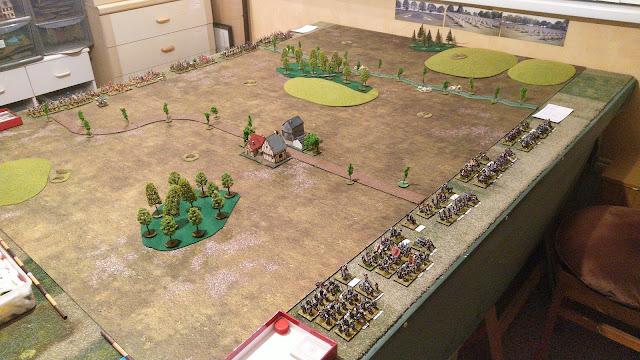 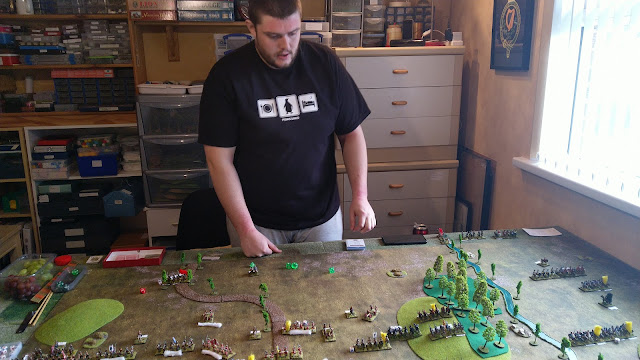 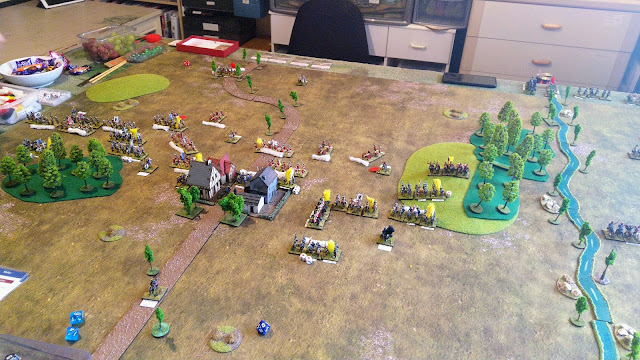 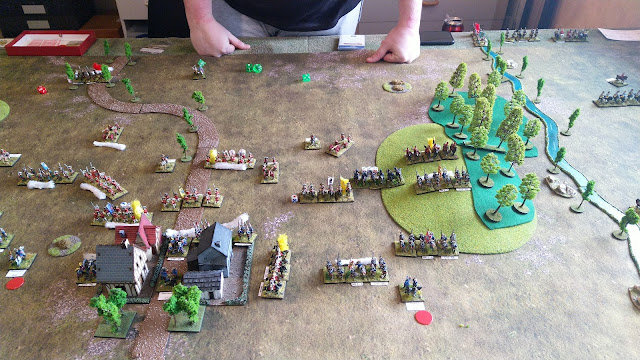 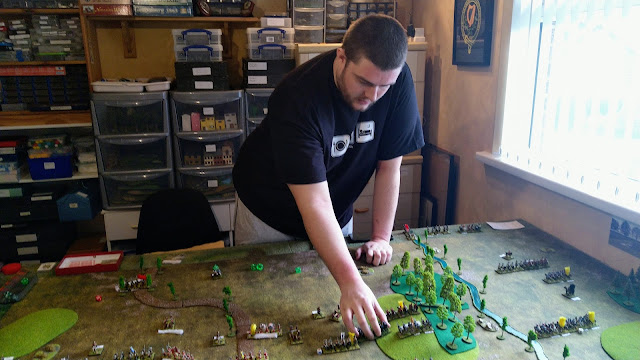 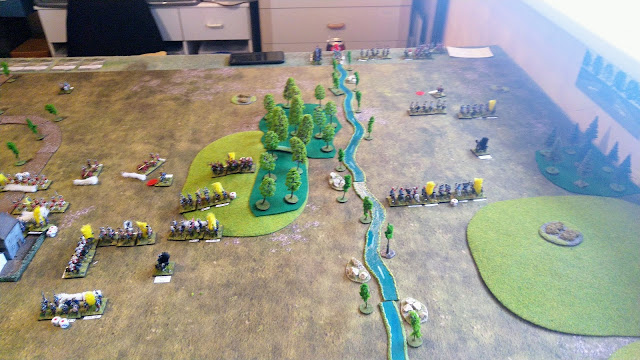 Bloody losses on both sides 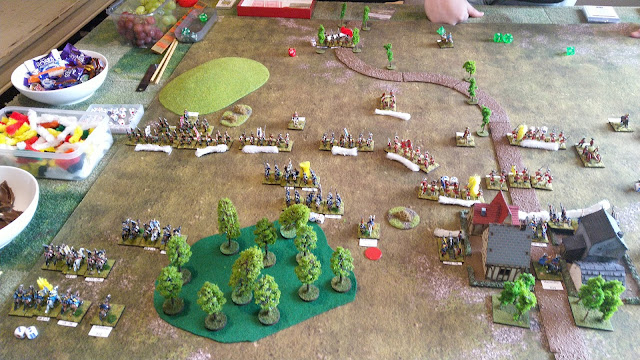 I Ain't Been Shot Mum - South of Cherbourg 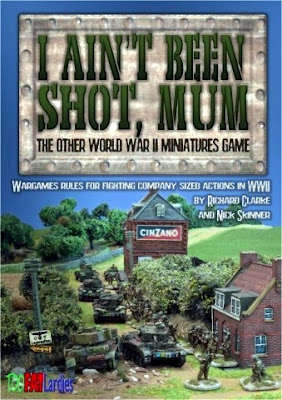 Played one of the introductory scenarios from IABSM with Stephen 'South of Cherbourg'.

Very enjoyable it was too despite less than stellar card sequencing for Germans even with two 'Tea Break' cards in deck, I had two turns I got virtually no activations whilst Yanks had several.

Must say this sort of system really appeals to me as I prefer this to standard you go I go styles overall and IABSM works pretty well for the Company-a-side game it covers.

We failed to finish (spent way too much time waffling about our frustrations with ongoing Covid crap) but did get to see lots of action.

The on table 60mm mortars teams (3 of the buggers) seemed pretty effective especially compared to my largely ineffectual off board 81mm mortar battery.

This of course assume we were doing things correctly which not a given after so long away from rules, and still find some parts rather under explained despite this being a third edition.

We fluffed the auto spot and close combat rules somewhat forgetting that close combat is automatic when units end up 4" apart.

Still a fun outing and whets appetites to revisit them again in future.

The table set up from US entry point (the road)

Action around the walled farm 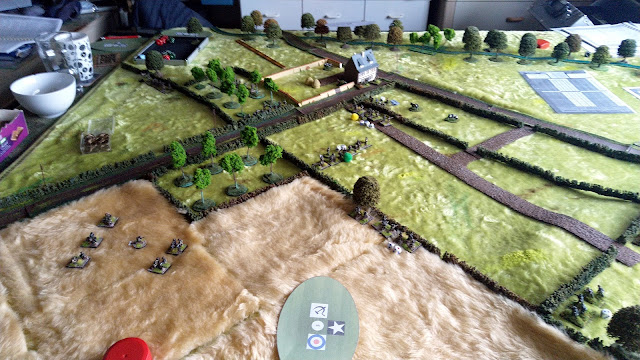 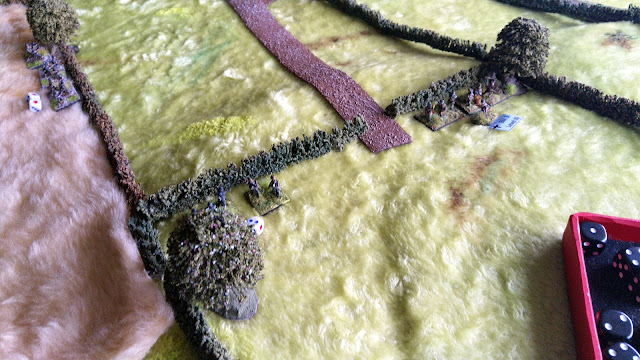 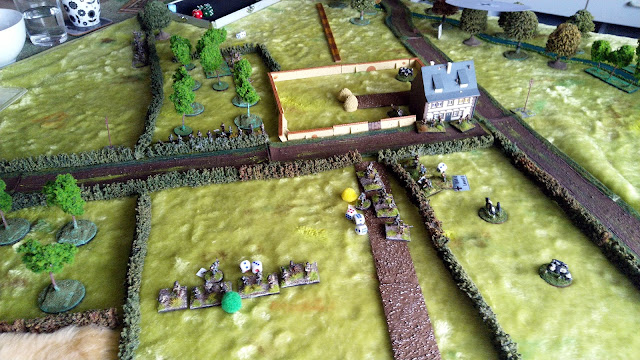 Another couple of games of LADG played today at Stephens.

First up it was my Avars vs Thematic Byzantines, however I had got my army list slightly schewed a tad by including Elite Medium Cavalry Bow (not allowed but could have been Heavy Cavalry Bow instead at same price) and then counting my Light Cavalry as Elite when only ordinary despite costing them correctly.

Not sure it made any difference as my shooting was pretty pants from get go but may have made a couple of elements hang around longer than they should due to Elite bonus ?

Quite evenly matched armies although the Avars find it difficult to deal with supported Byzantine heavy infantry of which there were thankfully only a few.

Next game I fielded an all mounted Central Asian Turkish force for a good historical match up against T'Ang Chinese.

My 22 elements were all elite but again they just have no real answer to the T'Ang mixed spear and bow heavy foot of which comprises a third of their force.

Thankfully the river Stephen placed turned out to be dried up so I did try a flank march with a light cavalry command which arrived right away (ie on turn 2) which was maybe just too early letting cat out of bag rather soon, but at least they arrived.

T'Ang where able to march right along my left flank and push the 'wall' of heavy foot directly forward due to good leaders and high PIP rolls, of course I managed to roll a one twice for my command PiPs limiting my ability to react.

The Chinese heavy foot then shot up my light cavalry and a gap soon appeared in my center as my left wing cavalry clashed with more numerous T'Ang mounted.

I did kill a couple of crossbow units with some lucky shooting and killed a cataphract but too little compared to losses I sustained as Turks fell apart.

The 'jet propelled' T'Ang do an on table outflank

My left wing in difficulties with low PIPs hampering options. 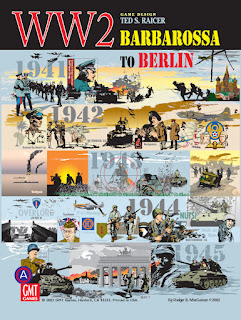 Got Barbarossa To Berlin board wargame to table for short solo session.

Been awhile since I have had a board game in action and very enjoyable this was too even if only solo mode.

This game really does show just how preeminent the Eastern Front was compared to the sideshow that is the North African theatre (but a possible drain on resources) and even when Western Front is opened in Italy and France the main area of pain or gain for Whermacht is definitely Russia.

I only played until Total War started and Germans up against it due to insufficient VPs gathered in Russia and think the would have been hard pressed had I continued to bitter end.

Moscow was threatened but Panzer Armies failed to take it and then suffered losses to Panzers (a real hurt to German cause), Leningrad also held out and Germans never really got further than Kharkov before having to shore up a collapsing line. 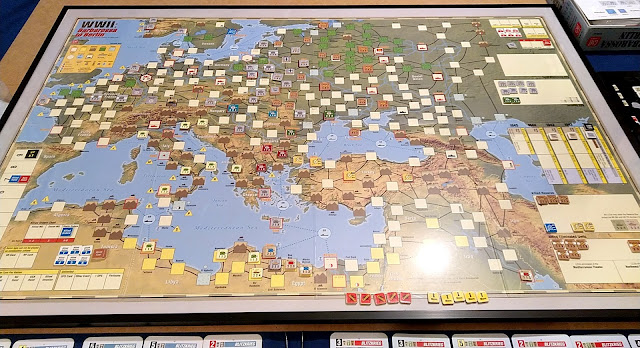 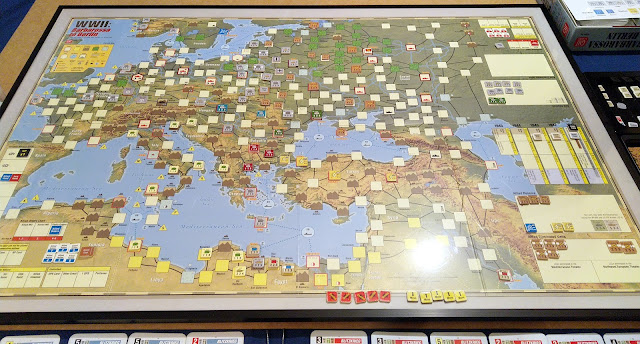 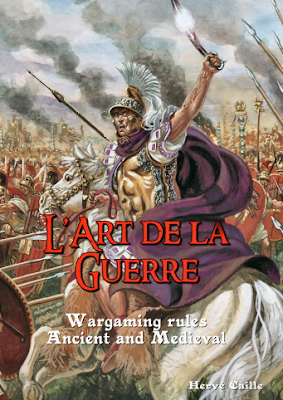 Being a masochist of sorts I decided to try my Maurikian Byzantines with LADG today.

I find the Byzantines rather impotent and difficult to organise effectively but both good games.

The Arabs are a nightmare with the solid line of heavy infantry swordsmen to which I have no real answer. I used a Bedouin Ally which is cheap and did sterling service. I held my Skutatoi and bowmen back in center straddling a hill as no match for Arab foot and tried attacking with my mounted on my left. I had excellent shooting dice it must be said but this just does not do enough damage before my mounted have to fight.

As expected the elite Boukellari held their own but the ordinary Defensorses and Hun lights succumbed too quickly leaving my elites to be flanked and overwhelmed. A couple of poor evades rolls saw me lose some light infantry which are costly hits to army and a deluge of disordering hits saw my army morale plummet and break.

Second game against Sassanids was a completely different affair with lots of ‘micro’ manoeuvring and swirling combats. I did not use the Arabs this time fielding a couple of Optimates (elite lancers) and Cursorses (LC bow) in their stead. I even managed to catch a group of evading Sassanid heavy cavalry in the rear with my own cavalry but failed to kill them off and again my lesser cavalry was mauled by a marauding elephant and my army morale collapsed. 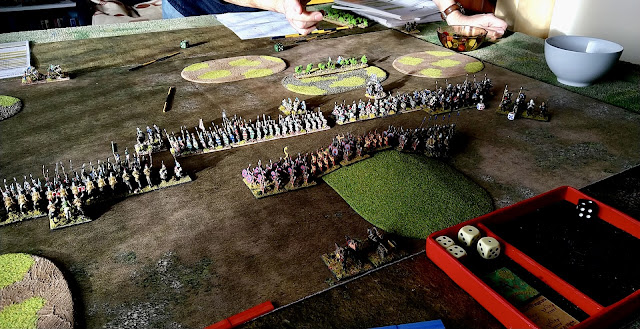 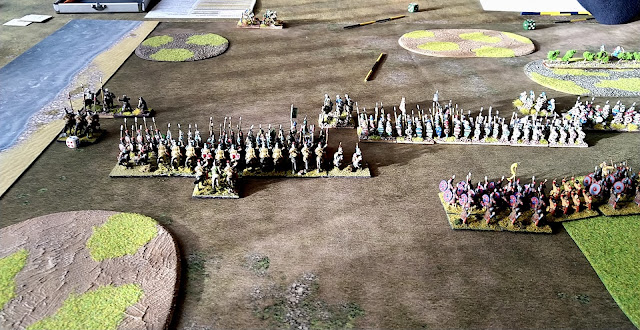 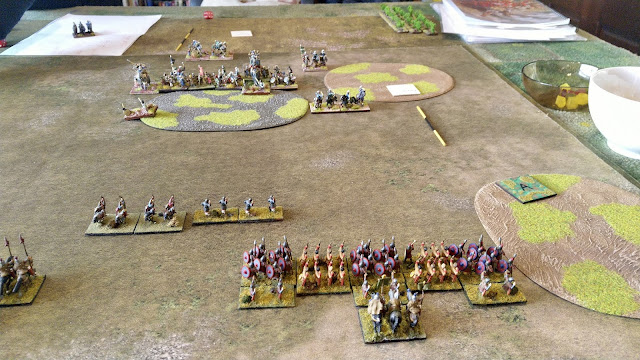