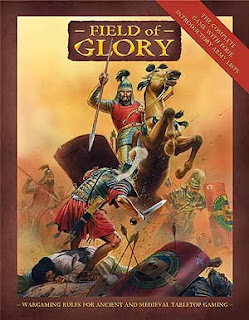 Played a doubles game of FOG at Mr Pollock's house, on his very nice table,  using 1000pts per side (which seems to be standard doubles sized 'tourney' type game).
Mr P is new to rules and so we thought this might be best way to show him the ropes. Sadly for him he was paired with the dice rolling underacheiver of this or any other Century ie me !
Mr P has a T'Ang Chinese army so thats funnily enough what was fielded (with a Sogdian ally supplied by moi) whilst the brothers Grim (ie Brittain) used an Abbasid Arab army for a fairly historical matchup.
A good game as always which flowed pretty well considering Mr P was new to system.
He sent my two Heavy Cavalry Lance armed units on an out flank move on enemy left and we tried to refuse our own left flank (quite a lot of terrain over there).
He deployed a solid Infantry center (Chinese Spear and bow mixed units) with his 'shooty' Cavalry (he had one unit of Cataphrats Lancer types) and Light horse supporting flanks.
However the Arab foot whilst mostly average Defensive Spearmen did have a couple of units of Dailami Superior Impact foot types and all the Arab cavalry (including their Light Horse) had Lance.
The 'shooty' type cavalry are flexible and versatile but maybe a bit hard to use for a first timer and terrain was unkind to him leaving nowhere for his Medium Foot to deploy in (the -1 for MF being beaten by is often crucial in failed Morale checks).
When the Arab foot hit home the T'Ang began to suffer but the main tipping point towards disaster was on right where Mr P managed to roll low enough for a foot unit to go instantly Fragmented and then a Cavalry unit saw its General die in combat caused my consternation on this flank !
At this point my outflank arrived to be faced by two identically armed Arab lance units.
The inevitable dice fest saw one unit each lose but John managed to kill my counter charging Sogdian General whilst I missed his narrowly by rolling a 10 (on 2d6) when 11+ required...............damn.
At this juncture the Arabs had destroyed or routed most of the T'Ang foot and had units about to flank those remaining and ready to loot T'Ang camp.
So time was called with Arabs triumphant.
Mr P seemed to enjoy the game and grasp the basics of the FOG system.
He obviously needs more practice with the various troop types and match-ups in his T'Ang force.
FOG certainly a lot easier to teach than Dbmm.

Arabs on left T'Ang on right 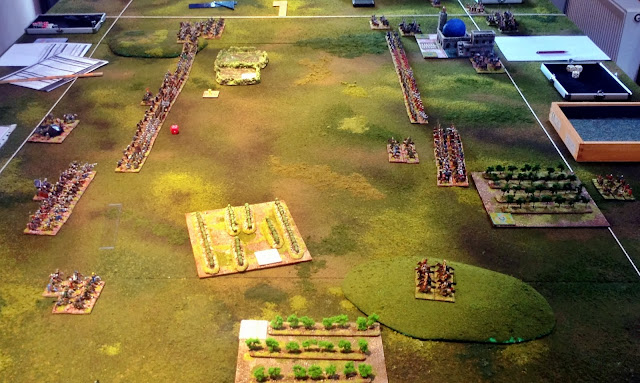 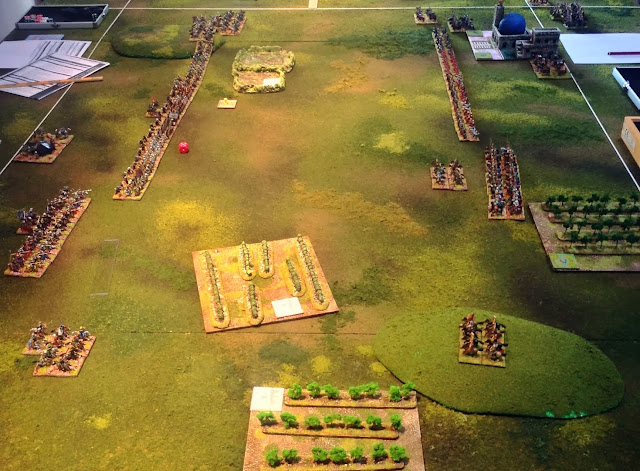 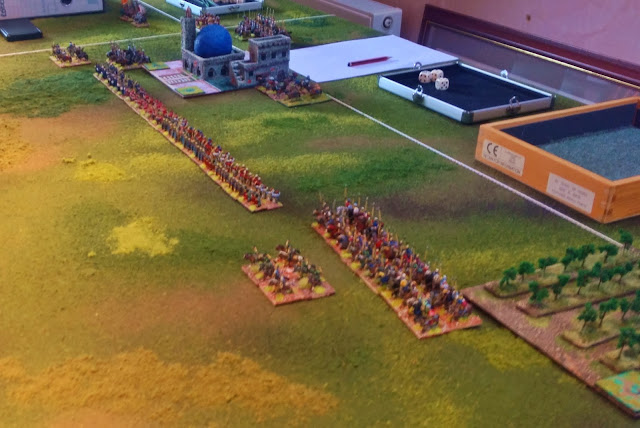 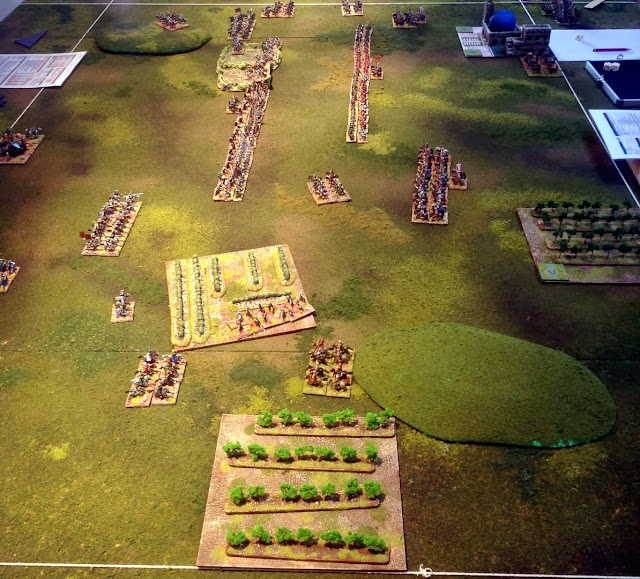