Field Of Battle - Battle of Kolin 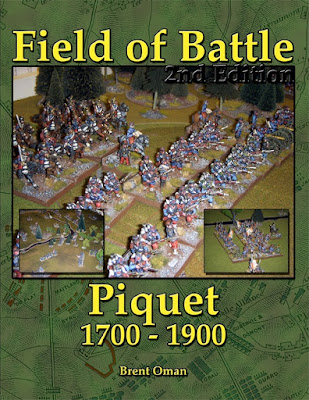 After a couple of weeks of endless long days at work I managed to arrange a multi-player game using Field Of Battle at my gaff today.

Decided to do a SYW bash and with its anniversary having been on the 18th of June Kolin seemed the perfect scenario to try with 3 Austrian and 2 Prussian players with myself as Umpire.

Stephen B, Stephen P, John, Richard and Darren arrived and I randomly (via cards) allocated commands with Stephen B and Darren as Prussians and the others as Austrians.
I made units roughly as Regiments (ie 2-3 Battalions) which still yielded over 60 units in total for the scenario.
I boosted both sides Morale total by +10 to ensure game lasted.

Units were laid out on reasonably historical positions with some leeway granted to re-position Reserves.

A very successful game ensued which went right down to the wire with Prussians hitting zero Morale first but surviving first Army Morale Test.
They then got a run of initiative and managed to force the Austrians to zero morale as well and then 'stole' some 13 Morale Chips from them through losses.
This broke the Austrian resolve and they quit the field before any Army Morale tests.

FOB generated its usual exciting ebb and flow to the game with Austrians coming of their ridge line defence to pressure the Prussian left wing (lead by Richard to gasps of shock from all !!) whilst the Prussians forged ahead in the center and with their right wing.
The Austrians caused multiple casualties on the Prussians but with better Officers Frederick's lot were able to recover Hits and Routed units impressively.
A multi unit volley by the Prussians on the right saw some 4 Austrian foot units Rout in one turn (they managed to recover all but one but could not Rally off the hits).
The game saw Cavalry clashes on both flanks with mixed fortunes but again the Prussians seemed able to Rally much quicker and effectively.
At one point the Prussian right wing seemed to be folding only to Rally and force back the battered Austrian mounted wing.
Both sides suffered heavy losses and as previously mentioned the Prussians lost all Morale first but weathered the storm despite Freddy (ie Stephen B) being almost ready to concede at that point and managing to snatch a Minor victory from the jaws of defeat.

No other rules sets I have tried suit larger scale battles with such elegance and playability as FOB whilst generating such a exciting narrative to the game.

Check out some excellent pics on Darrens Blog at http://warfareintheageofcynicsandamateurs.blogspot.co.uk/2017/06/battle-of-kolin-1757-at-sgt-steiners.html


The scenario set up with card place holders for Austrian troops 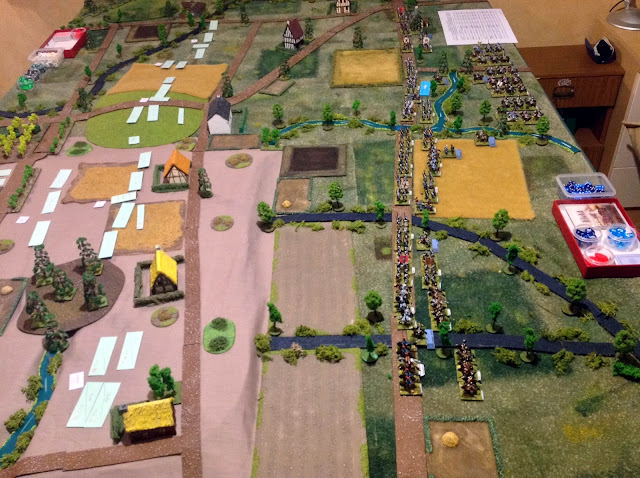 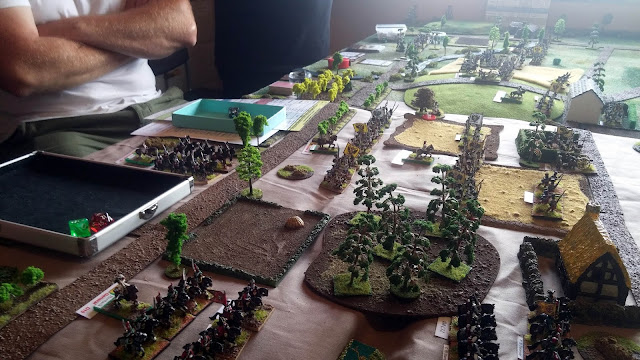 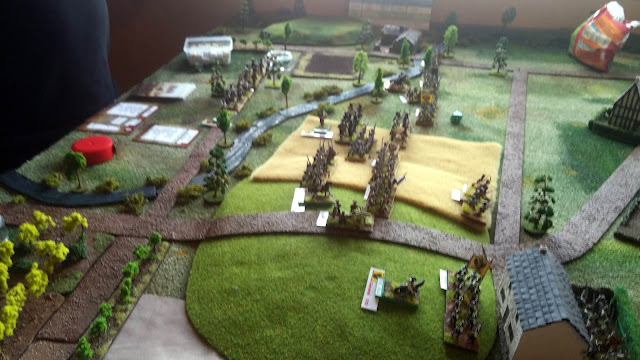 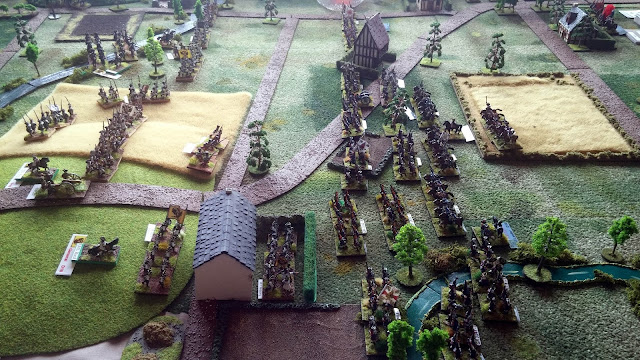 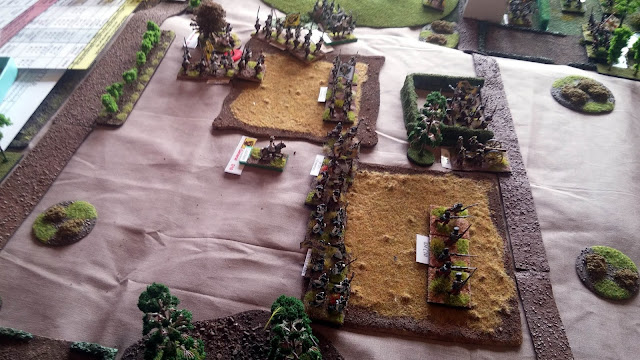 Prussian push on in the center and right 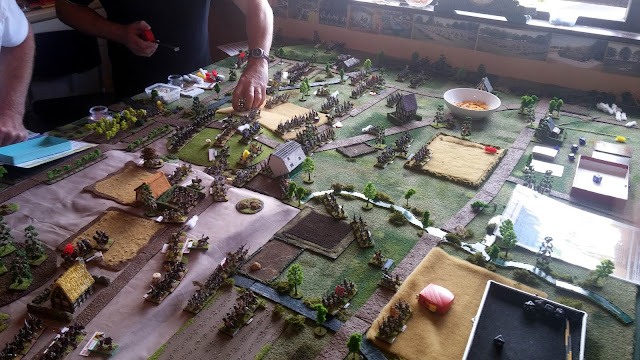 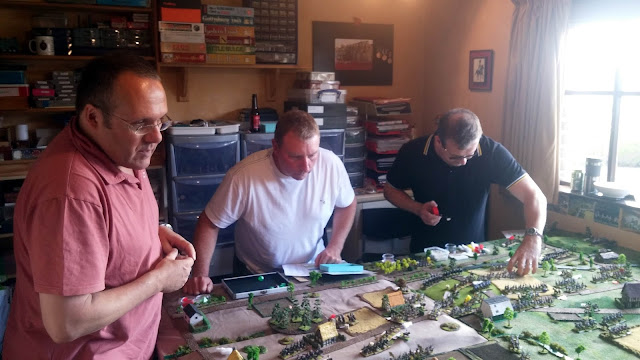 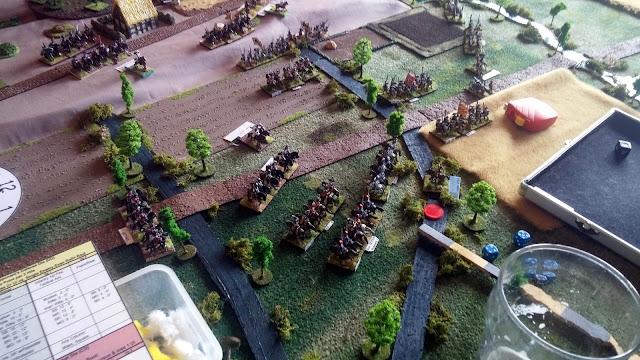 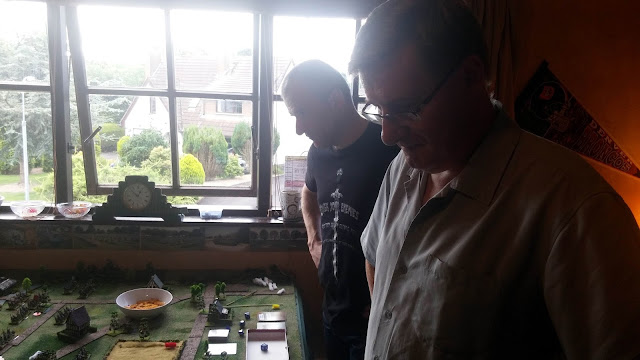 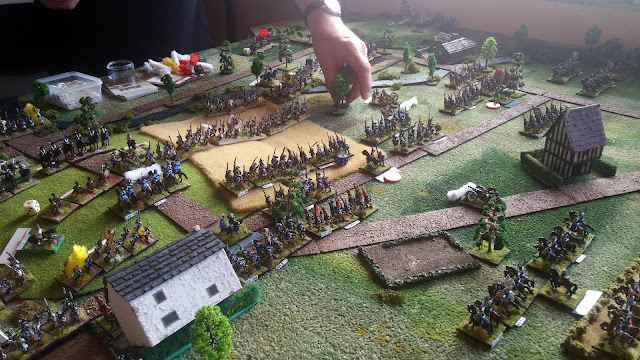 And so to at the edge of Krechor ridge 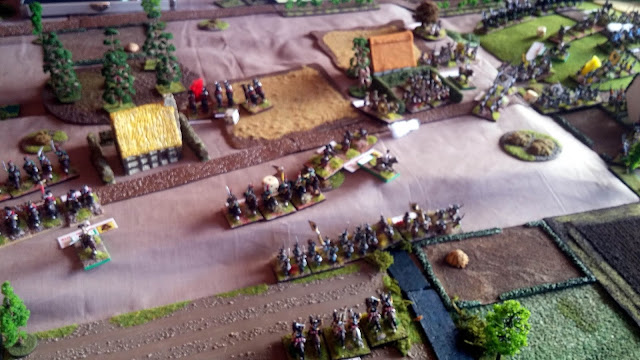 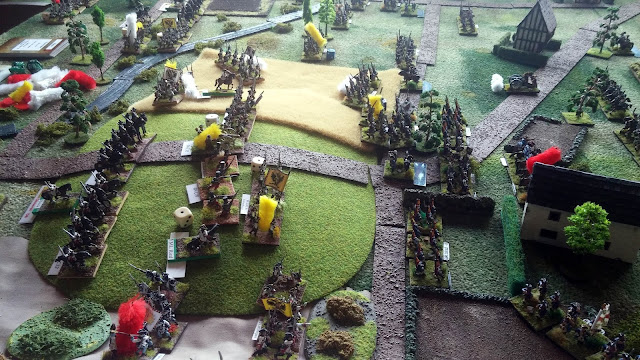 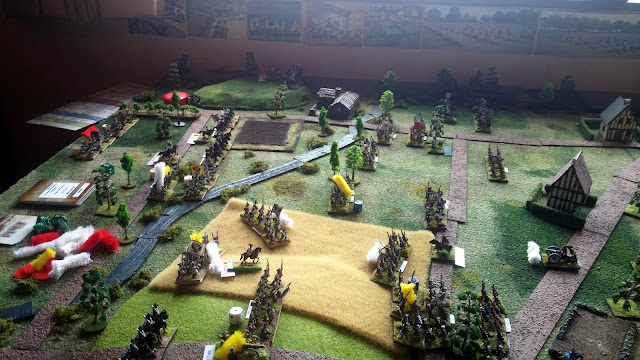 Austrian right has pushed back Prussians albeit temporarily 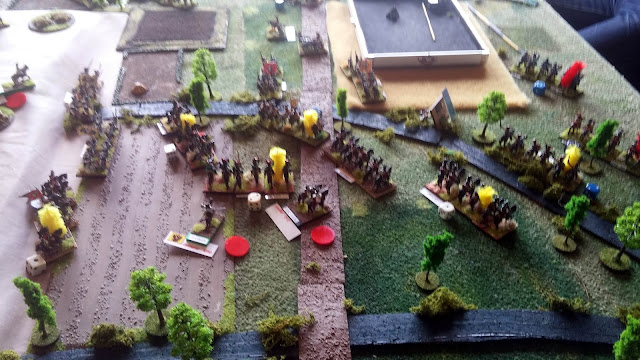 Prussians have rallied and return to fray 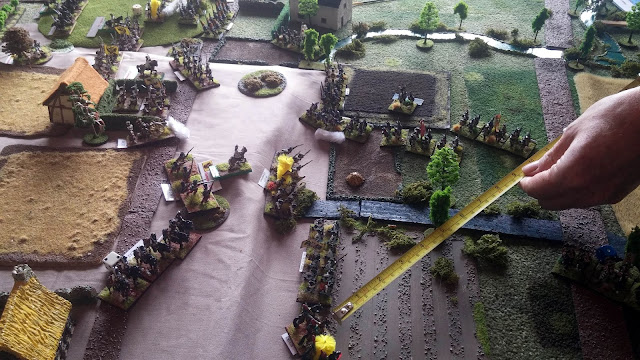 Austrians in trouble around Pierovsky hill 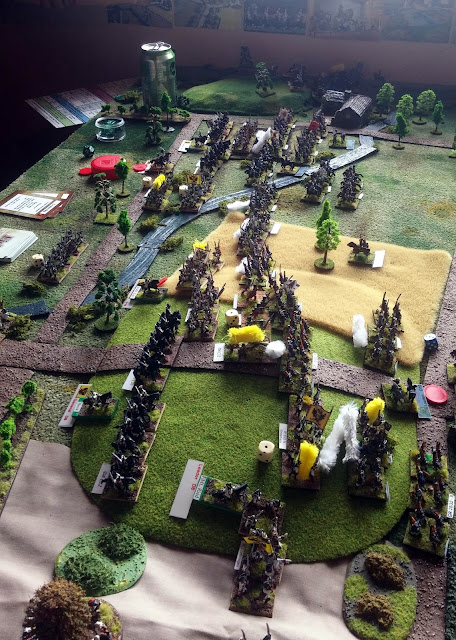 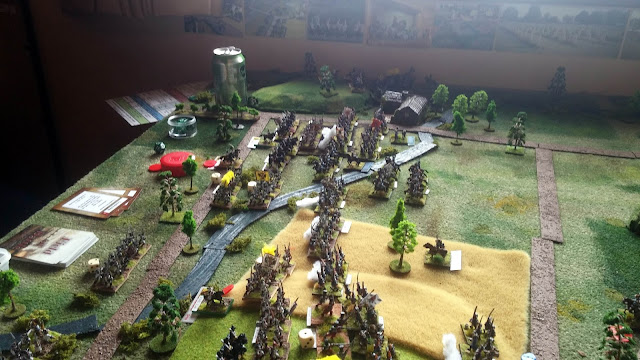 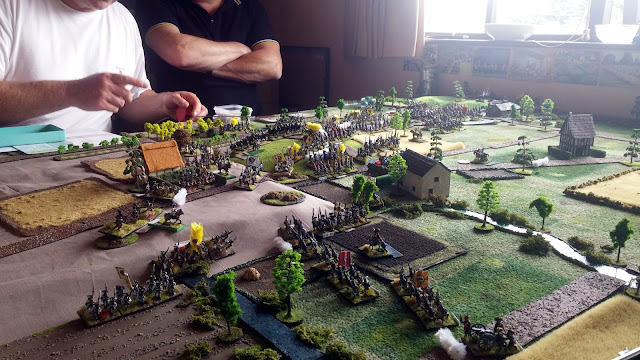 (Earlier in battle) The initial Austrian Cavalry charge on their right 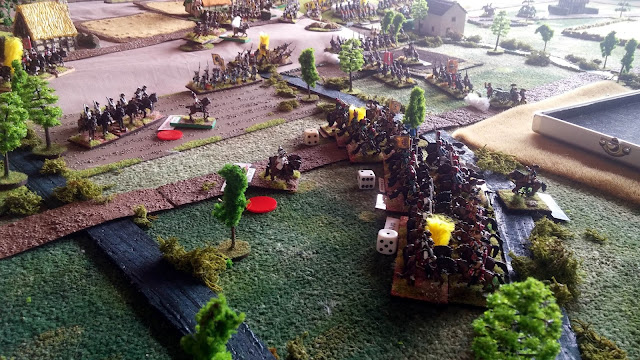