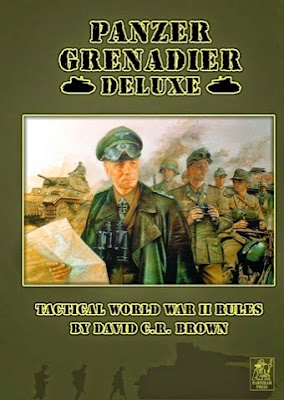 Played a game using the most excellent Panzer Grenadier Deluxe rules by Dave Brown today.
Scenario was 'Action At Tessel Bretteville' from venerable Overlord rules which we had originally intended to use but went with PzGr instead just using the 1:1 Extended range rule option.
Germans are well out numbered have 1 weakened Company (equivalent of a single Platoon) with support from an MMG team a couple of 81mm Mortars some off-board Artillery and 2 Tiger 1s.
The Soldaten can be dug-in and can fortify any house they occupy and have barbed wire and an AT Minefield.
British have a full Infantry Company with an MMG Platoon and off board Artillery backed up by a Troop of Shermans (4 Tanks one of which is Firefly) and 2 Churchill Crocodiles.
We played this many years ago using Overlord and was a tough proposition for the British as they count as Inexperienced against Elite Germans which means the Artillery really plays havoc with their Morale in addition to causing casualties.
Using PzGr I classed the Germans as Veteran and the British as Regular which is not as great a disparity.
Also off-board support in PzGr is limited to 2 defensive and 4 offensive missions.
A good game with this excellent rule set as always.

I pushed my Brits mainly on the left (including the Shermans) trying to use the minor cover of the orchards with only my Churchills on the right.
We used the attacking Fog Of War cards for first time (not needed for defenders as they count Hidden with 1 unit in Ambush) and these worked very well giving the attacker some 'unseen' movement.
Of course I stumbled into Grenadiers dug in within the orchard and the two Tigers deployed well forward.
The Tigers engaged my Churchills forcing them to Disengage and damaging one.
Winning a key Initiative (I won 90% of the initiative today !) allowed my Firefly to get a flanking shot on a Tiger and brew it up.
Its mate however proved invulnerable and damaged the Firefly.
The Germans ambushing my lead Infantry Platoon caused few casualties but did cause numerous Suppression and Fall Back outcomes.
My dice rolling today was freakishly good for the most part with several 'box car' rolls which garner extra effects in PzGr.
I did however roll 'snake eyes' when firing an Artillery stonk which caused a 'Danger Close' result on several of my foot teams Dispersing (ie KIA/Destroyed) 2 of them !
But numbers and the Sherman support eventually told as I destroyed a couple of German sections although they proved pretty tough though in foxholes and with barbed wire (as this meant I could not get into close assault as wire takes a full turn and a test to cross)
But as the sparse German numbers meant they had a low Battle Group break point the Germans were forced to yield.

Yep that's right folks an actual win over Stephen for once !!!

The HQ Impetus and Activation system in the rules works very well and all the firing and moving systems are simple to use.
Compared to Battle Group rules we have been using these offer a bit more 'meat on the bones' as it were with better graduation of AT fire ranges although Infantry is destroyed (ie removed from play) more readily and less 'gimmicks overall'.
Less feeling of 'buckets of dice' and 'everything hits on a 6'
But both very playable and fun rules.

Only a couple of pics as I was engrossed in action ! 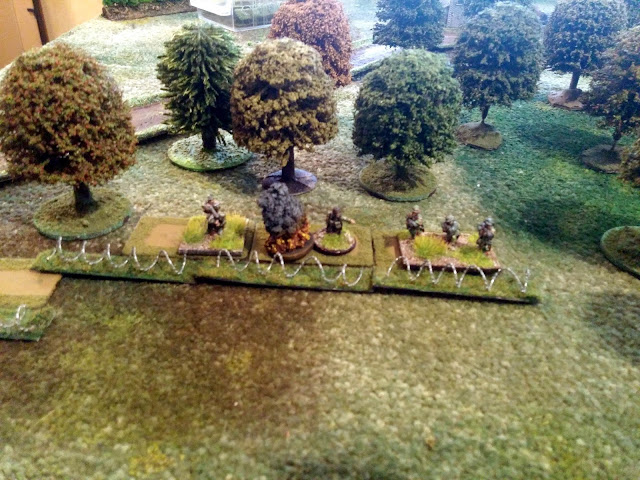 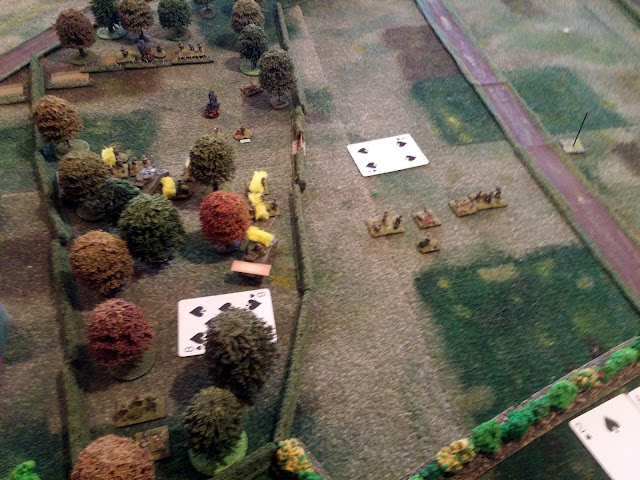 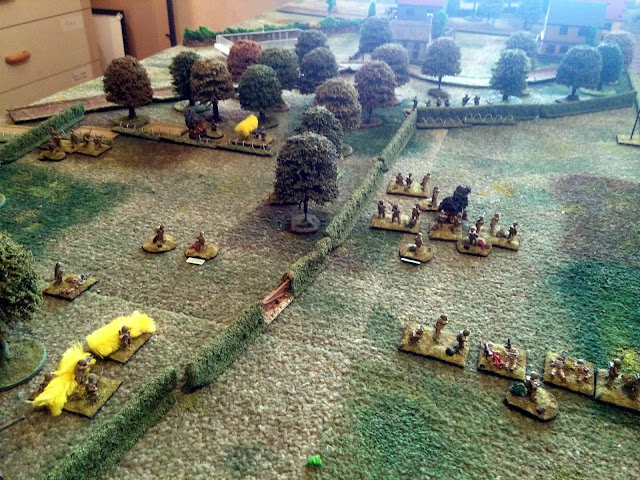