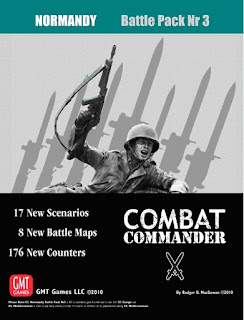 First up was scenario covering attack during the early hours of D-Day atn Benouville Bridge by British Airbourne troops. This was our first Night scenario (easily handled by Hinderance system) and associated use of Starshells. British 'land' around a specficied two hexes with very little flexibilty. Germans have greater choice but essentially set-up in a trench line at one end around a Pillbox housing an Infantry Gun. My Brits approached the first hex of trench line but were undone by timely arrival of German Hero who rallied a unit and then stubbornly refused to die !! I could draw no Advance cards to get into melee with the sod. We both received re-inforcements but the game ended on second Sudden Death opportunity with Brits well behind on points. 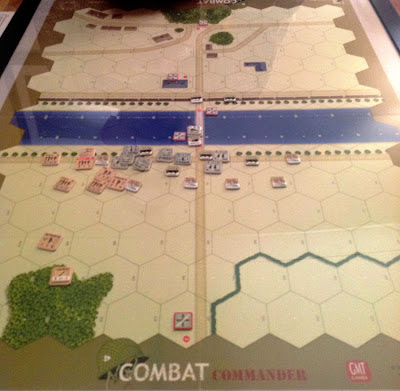 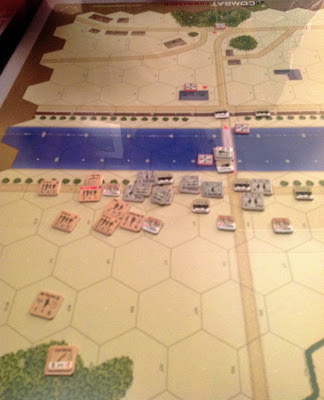 Second scenario was behind Omaha Beach later on D-Day with a counter-attack by Krauts against Yanks. Both could acheive victory by exiting units for double points. However both sides unsurprisingly block each others route to such exit hexes. Yanks had some really good luck in this game (aided by their higher Broken Morale values) with 4 Sniper Actions taking out 2 Kraut Squads and gaining support from a 105mm battery which played merry hell with the Germans as I pulled in numerous Artillery Request cards to use with my 3 Leaders. Dad did manage to engage me in a melee in one of few houses on the map but I had just drawn in 3 Ambush cards and wiped out the assaulters including Command value 2 leader. This was swiftly followed by an Artillery strike on a hex with 3 Broken German units who also died taking Kraut losses beyond their Surrender level. 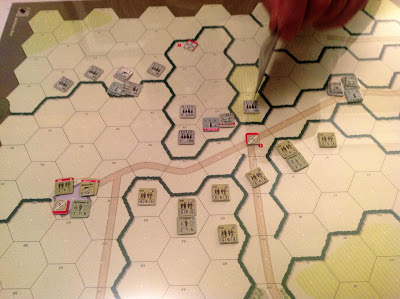 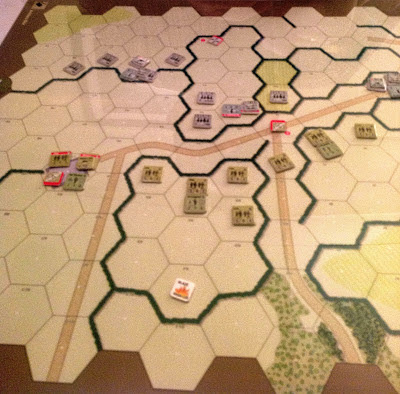