Field Of Glory V2: Gauls vs Romans....Or how to lose 4 Generals whilst only fielding 3 !

Played another FOG v2 game today at Stephens.
I used my Celts as Gallic versus Stephen's Marian Romans.
Both sides fielded 11 units.
My lot comprised 4 units of Warrior Heavy Foot (3 of 10 and 1 of 8 bases) with an Armoured and an Unarmoured unit of 4 Cavalry and 2 units of 4 Light Chariots with a unit of 8 Javelinmen.
I had an Gaestati Allied Contingent of 2 units of 8 Heavy Foot of Superior ilk.
I used two Gallic Field Commanders and a Troop type Ally.
Roman had 5 Units of Legionaries (3 x 8 and 2 x 4 bases) 2 units of 4 Light Horse one with Javelin (Numidians) and other with Bows.
A unit of 8 Slingers and one of 6 Javelin armed.
A unit of 2 Elephants and one of 4 Cavalry were also deployed. Romans used 4 Troop Commanders.
They also had a compulsory Fortified Camp and used 6 sections of Field Defences.
Terrain set up worked quite well for me being mostly open however the Roman Field Works were an added difficulty aligned beside some uneven fields.
Hostilities began with Romans using Commanders to double march light troops forward to pin my stuff back.
On my left I had my Chariots and Cavalry and these faced the two Light Horse units. Inevitable game of 'chasies' ensued here.
On my right judicious use of a large unit of Slingers slowed my massed Warriors to a crawl as I tried to swing around behind the Field Works.
In the centre I had a unit of medium Cavalry in skirmish formation in attempt to counter opposing Elephants.
The Gaestati were arrrayed in centre also.
Things got of to bad start when my Cavalry failed to out distance charging Elephants and were promptly hit in rear and dispatched !
I then charged on my left with a Chariot block into a small unit of Legionaries.
We both had Commanders present. Romans narrowly won but in second melee round I lost my first General to a roll of 11 on 2d6 !!
However we then realised that the Chariots should actually have broken off from steady foot at end of preceeding turn and so my Leader was ressurrected !
As this occurred the Gaestati and Ally General were lined up and charged into two 8 base Legionary units with two Commanders.
I then used my 'ghostly' leader to join one of these units, which in hindsight was another error as only an Ally General can command Allied troops.
However this proved to be a mistake in more ways than one.
The Impact phase fighting in which each of our units rolled 8 dice each and with Generals fighting in front rank allowed us to count as Elite and therefore re-roll any 1 or 2  saw my blokes beaten to a bloody pulp as Romans rolled 8 & 6 hits to my 4 & 2 (and the sods passed both death rolls !!!)
One unit went disrupted.
But to add to my woes Stephen then rolled to kill both my Generals (I of course failed to kill his) rolling a 12 and an 11 killing both !!!!!!!!!!!!!!!!!!!!!!!!
This meant further Cohesion tests which both Gaestati prompty failed and no with no Commanders to rally them.
My right wing was finally getting deployed as Romans swung from centre to meet them.
Damn Elephants took out a unit in a flank charge over two turns just as my CinC arrived to kill the Elephants in turn (my only success all sodding day).
But unbelieveably Stephen had another roll to kill my CinC and of course acheived the requiste 12 leaving me totally Leaderless (and with his fourth success out of four attempts !).
I was now tettering on edge of defeat which was soon acheived by his Light Infantry sacking my Camp.
A great game despite the massacre of Gallic leadership with the key combat being the Gaestati versus Legions which could have went either way but for my crap dice rolling and re-rolling.
I do find the Celt/Warband types more viable in FOG V2 and enjoyable to use and definately much less frustrating than in DBMM (such a match-up would have seen Regular Romans dance away from Warband). 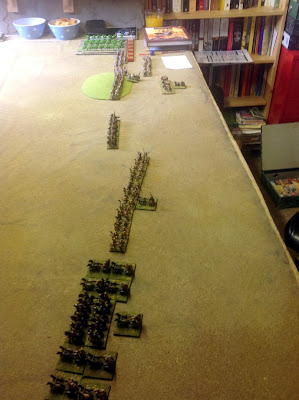 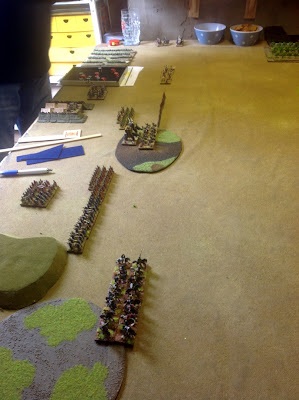 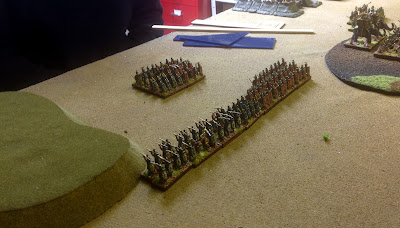 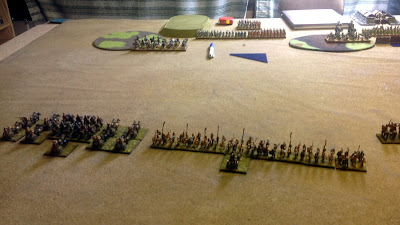 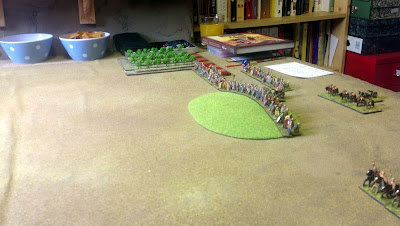 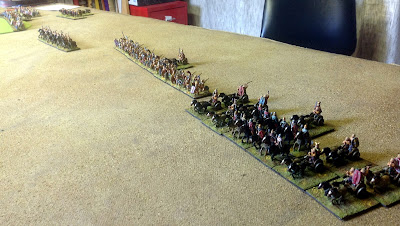 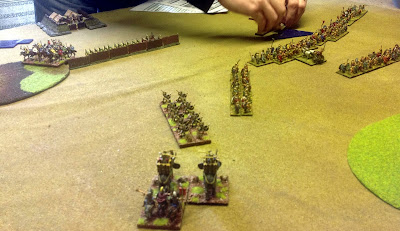 The decisive match-up just prior to lines clashing 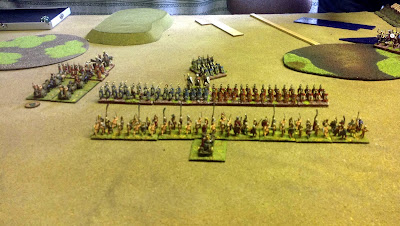 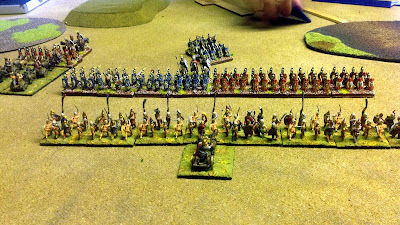