Had an another evening free so Stephen and I decided to have a game and had a toss up between DBMM, FOG Ancients or FOG Renn and we plumbed for FOG again as both keen to try out differing armies with latest version.
So I decided to try a Turkish type army going with Early Bulgar in end to try out blocks of 6 Lancers as I knew Stephen was going to try a Chinese type army which always has lots of shooters, and indeed he picked Sui Chinese as opponents.
What a great game it turned out to be again with the 6 base Lancer units proving quite robust.
One did ride to its doom taking out a couple of units before being surrounded and crushed as it outrun support (Slav foot).
Mind you it was Stephens turn to have some truly awful dice rolling with him three (!!!) times roll snake eyes on Cohesion tests (I could of course not fail to cheer/shout/jeer each time !!).
We ran out of time to finish game with it hanging in balance with another two 6 block Lancer units about to engage enemy but with Sui Cataphracts also due to join fray.
Great stuff and we seem to be enjoying FOG more each timne we play. Strange the change from finding it fairly bland to enjoyable.
Compared to Dbmm it is most certainly easier to pick up/understand but both have their pluses and minuses and I would happily play either.

Only a couple of pics from set up as I got too engrossed to remember to take more. 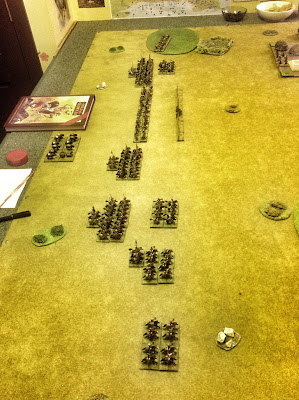 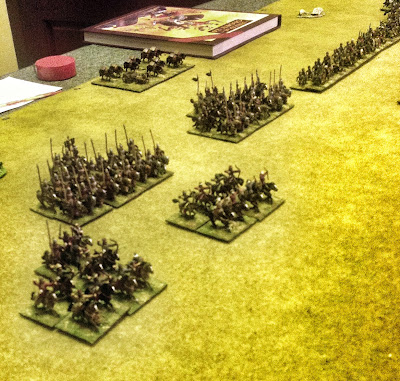 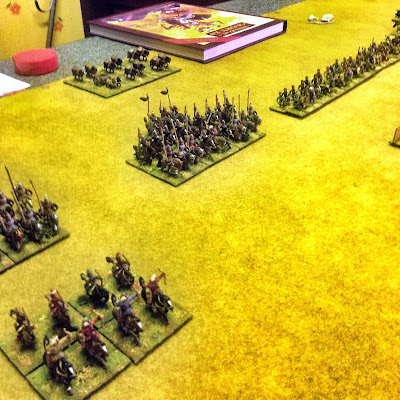 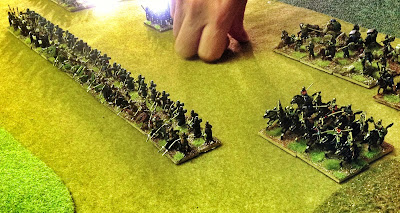