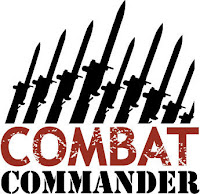 Another couple of Combat Commander games played at my fathers this rainy Saturday evening.
And another two hugely entertaining encounters they turned out to be.


First up was a scenario from a C3i magazine (Scn 102 I think) with a Night Time attack set 23rd July 1994 with powerful German force attacking Americans.
Germans had mix of Paratroops and Pioneers (one with a flamethrower) against a US force of Line troops.
Besides Night effects on shooting we both had odd hand rules in force. Yanks had only 1 action per turn and the Krauts only 1 Discard.
This certainly made tings interesting.
Krauts were pretty unlucky in couple of close combats I initiated never having any Ambush cards.
This allowed me to take out their best leader (after several exchanges of the Initiative card for re-rolls !).
This fairly stymied their attack and a virtual whizz through Time Triggers saw them lose on points as Sudden Death arrived. 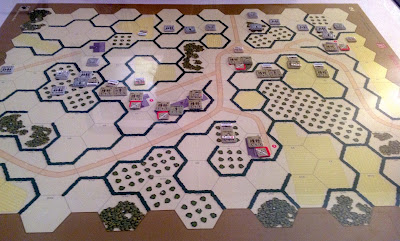 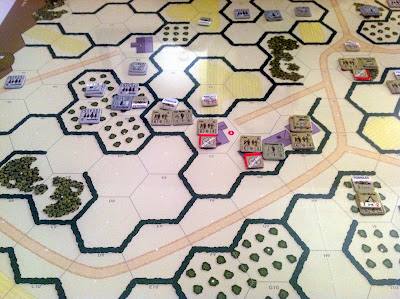 Next up we tried another Randomly Generated Scenario for which Dad rolled and found himself as Italians "ha ha and great !" roared I and then duly found myself in charge of a bunch of Greeks (ie the dread 'French' hand).
We decided to randomly pick our forces from the available chits and this resulted in an Italian Fucellari Company (a massive 18 Squads) attacking a lowly Greek Detachment (a mere 9 Squads).
Luckily for me the map orientation was narrow as a wide set up would have left me very thinly spread.
The Eyeties looked impressive (almost Soviet indeed) when lined up  with the Plate-smashers looking rather unimpressive in comparison.
However I did have benefit of decent defensive terrain ie hills and had purchased 6 Foxholes to aid my bunch.
I also set up right in the Italians faces (risky as any disaster would leave my rear areas wide open) and the weak Italian Squad firepower became evident.
Several nasty Events struck us both and yet we ended up with 3 Veteran units on the map !
Eyeties had purchased an Artillery support in set-up phase (a nasty 105mm) but this in the end proved their undoing as in the close terrain several stonks fell short breaking more of their own troops than mine. Several of these I then dutifully shot down building up a commanding points lead (one of the random Victory chits was double points for eliminations).
Game ended on turn 8 after second Sudden Death roll with Greeks having amassed an unassailable 22 points. 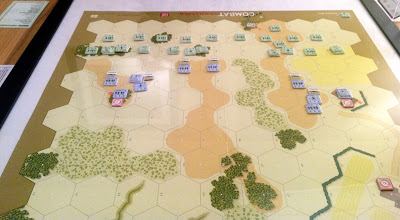 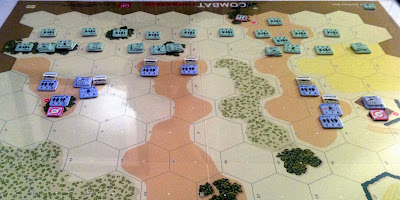 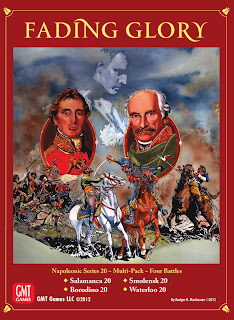 As to the new arrival this was an Ebay purchase of Fading Glory by GMT a boxed collection of 4 Napoleonic battles (originally produced under the VPG  Napoleonic 20 banner - 20 being upper limit of units per side).

This is a low complexity game with low unit count of which I started a quick game of the Waterloo battle.
Quick playing but with bit more meat on its bones than first meets the eye, especially with flexible (if risky) option to use Morale points to assist Combats, Rallying and suchlike.
Several optional rules of which only one I did use was the 'Battle Fatigue' option as bit fiddly to remember and not sure it really suits the complexity level of the game.
Nice to have as option though.
Components wise the game is excellent with nice mounted boards (2 double sided) and good chunky counters. 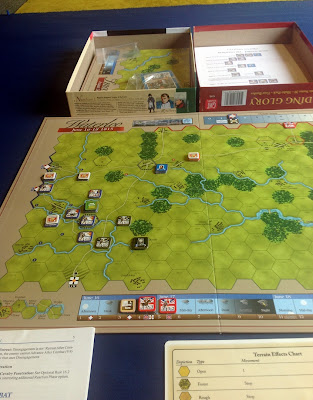 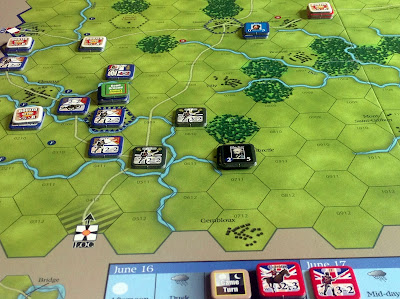 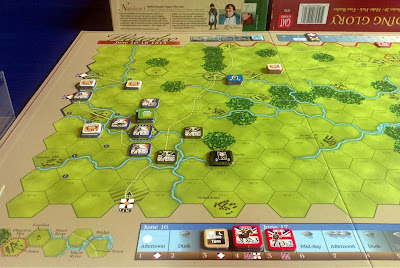 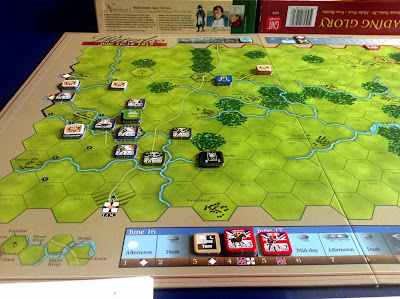