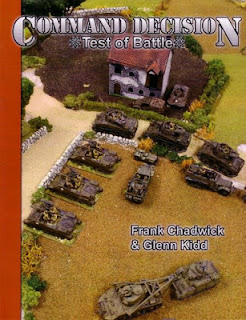 Game of Command Decision Test Of Battle at Le Duc's' yesterday as he wished to try the latest iteration of CD and had set up a Market Garden scenario from one of the official CD supplements.
Read his more in-depth AAR at http://warfareintheageofcynicsandamateurs.blogspot.com/2018/09/breakthrough-at-oosterbeck-or-not-with.html)
Think the scenario was entitled 'The road to Elst' but certainly set in that area with 30th Corps pushing along the infamous highway (lots of "this bits the wide part!" comments).
Game attended by the brother Brittain who commanded the Nazi defenders whilst Le Duc and I took charge of the British.
Game start delayed after extensive waffling session between all of us including diverse discussion of Le Duc's extensive library of books and rules, or thoughts on sci-fi games, fantasy games (ugh), board games, various projects and ideas we all have for various time periods etc etc !!
Once the fracas began it became very clear how tough the British mission was as we encountered various hidden German units and anti-tank weapons.
I was attempting to push on our left but got stymied in an area of polder and my armour on that damned road although I did destroy a PzIII Platoon and a battery of nasty 20mm Flak guns.
Le Duc on our right managed to push forward but at too high a cost and we called the game after 5 turns (in another 3 turns 2 Tiger platoons would have appeared)

We discovered a couple of rules we had missed in earlier outing with TOB, firstly that when issuing a Rally order it must touch the issuing stand so really means a turns delay as Battalion Commanders move to Shaken Companies (as their CO cant issue own order) to issue an effective order (ie within 6").
Also that the Regroup order now applies to Vehicles/Tanks as well as Infantry a change IIRC from earlier versions of CD.

Great to get a game in with 20mm kit ('midgies' as we call them) from Le Ducs collection. 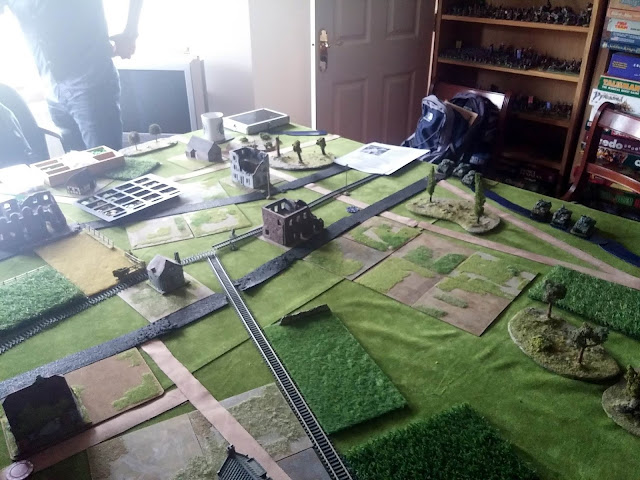 Push starts up "the wide part" 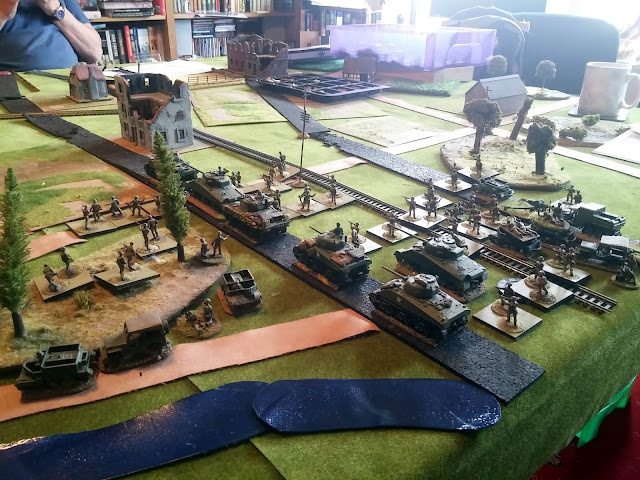 And the inevitable outcome 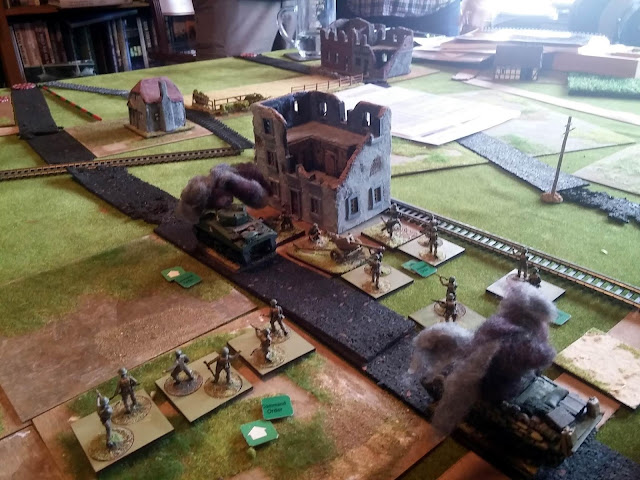