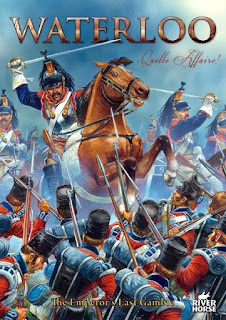 Just got this of EBay for a mere tenner ($15 ?) and a nicely made and low complexity game it is too.
Whilst simple in rules overhead and very abstract it has some very nice touches with Commander and Event cards and a 'you must do something' each turn process ie to pass is to end your part of turn.
Commanders are linked to specific Corps units except for higher leaders like Napoleon, Ney and Wellington, and can only activate units adjacent to hex the leader is placed in, and with Corps being somewhat spread out a bit its a balance between trying to mass your Corps or trying to gain quicker local advantage.
Terrain is very basic as is combat being a 'gang up' roll off system based on a standard 5 or 6 hits (6 only if in defensible terrain or 4+ if using Combined Arms).
Units are rated for Combat and Movement and can mostly take 2 hits prior to destruction with some variety in weak or strong units and some single step.
Attacker rolls number of dice related to his total strength and defender does same and results are Draw or related to he who has most hits this difference generating a Retreat or Loss, Retreat and a Loss or instant Destruction.
Again one or two nuances if in terrain or strong/weak unit.
There is limited Restoring of losses via event cards.
An interesting concept is the 'mass assault' mechanism wherein once a turn (and it ends your turn) you can declare an assault allowing every engaged piece to perform combat.
This can be key as most other cards only allow movement by certain units with only one or two cards allowing isolated combat.
A few more nuances such as Artillery firing at range in attack or defence or via Tactical Bombardment but all very easy.
Very much a race against time for the French to accumulate a certain level of Victory points (by inflicting losses) before the Prussians arrive, which is not set in stone.
Once Blucher's lot start appearing the French Victory requirements go up and the Allied card deck and options increase.
French however have advantage in initial card decks (players have a 3 card hand each phase of play) as they have more Commanders meaning Allies likely to run out of cards first leaving French a possible free hand.
All in all a nice little game. 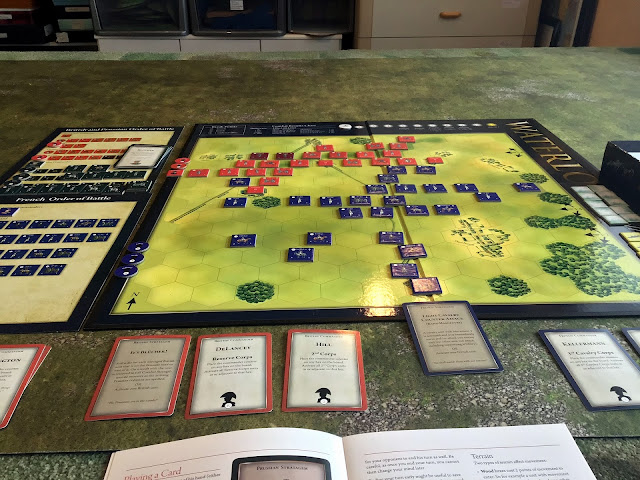 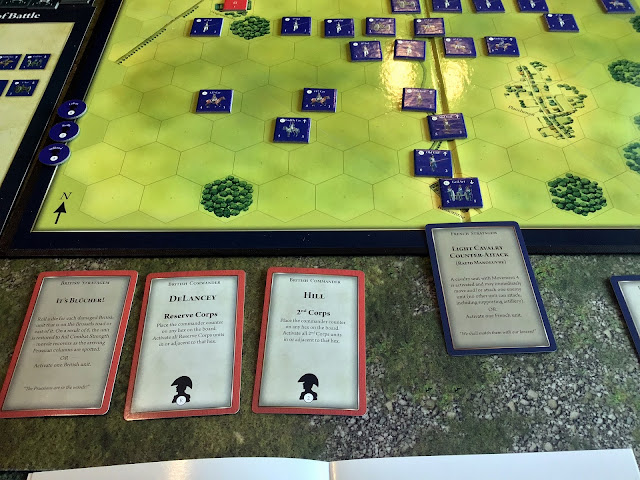