For King And Parliament - Battle of Montgomery 1644 scenario 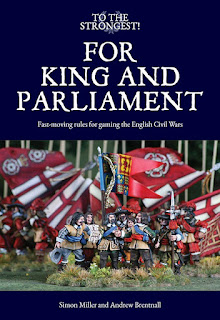 As a change from GDA we tried the FK&P rules today using our 15mm (with 6" grid squares) using the introductory scenario 'Battle of Mongomery 1644' with my TYW Imperialist standing in for the Roundhead force (only the flags look out of place).

We decided to skip the use of 'face' cards (which generate events and commander traits) to make learning easier but still found this to be a fun fast game.

I have always felt use of a grid was not ideal for minis game but it certainly made moves and ranges very easy to play (millimeters/angles and suchlike do not matter in this system) and was less obtrusive/annoying than I feared, Stephen simply used small stones to delineate grid which looked odd at first but was soon forgotten during game play.

Rules are fairly broad brush with not a vast variation in troop type or quality but with enough to generate a decent ECW period feel with some nice decisions to make and quick playing movement and shooting/combat.

We used the card system which I must confess I liked (as dice hate me) as it seemed to even out results for us both, but game could be played with D10 or combo of cards and dice.

Cards work well for the Command/Orders Activation with units potentially able to do multiple activations (although we both drew lots of Aces which are fails) and the increased 'costs' to do fancy moves (most anything other than straight ahead) and is largely intuitive and easy to pick up.

Hits from shooting or in melee are fairly hard to achieve (8+ or 9+ if disordered ie carrying hits) but can be hard to save (generally a 7+) and with units only able to sustain 1-3 hits things can get ugly quickly. Some variation in shooting/melee with things such as 'double fire', 'salvee', 'cavalry dash' garnering extra hit card draws in certain circumstances. We found cavalry got worn out quickly with initial charges generating maybe 5 cards (combo of shooting charging and bonuses) then maybe 2-3 at most thereafter.

Interesting game with plenty of incident, I lost Lt GenFairfax (worth 3 VP !) and several mounted units early on and was looking rather one sided but then I destroyed a unit of dismounted Dragoons whose Rout saw 2 Royalist foot also Disperse due to failed saves (morale) and earlier hits. I also had a couple of off-table units of cavalry (off foraging) which of course failed to arrive as reinforcements.

Roundheads hit their 13 loss level (basically 1 loss per unit strength point) first but Cavaliers were on 10 of 14 so fairly bloody stuff.

FK&P does pretty much what it says it does ie generates a low complexity fast playing game which was fun and played to completion in a few hours (always a bonus).

Certainly lacking the depth of LadgR or especially FogR but makes up for it in many other aspects.

Only a couple of pics as got engrossed in game which is always a good sign.

My left wing cavalry has mostly been dispersed 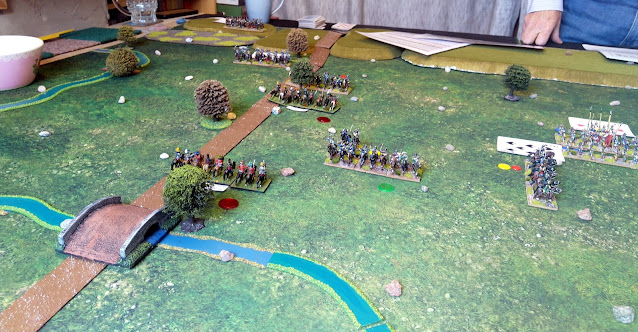