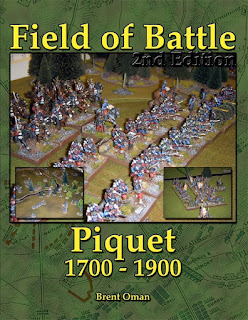 Game with Stephen today using his SYW Austrians against my Prussians.
We tried out the play test version of Seasons of Battle I have along with FOB2 for the tactical battle rules (why ? because I luv's 'em and SOB designed for use with).
Using SOB with couple of minor house rules I use (relating to set up of terrain) we had a smooth process yielding an interesting battlefield with Prussians able to force Austrians to deploy a command first (Deployment Advantage) but with Austrians gaining a morale pool boost (Strength).
We also used a tentative points system (still needs minor refinement) to establish the SOB Armies which worked out quite well with Austrians have 18 units and Prussians 17 (we later changed points a tad which would reduce Prussians by 1 unit of Infantry).
I had Frederick as a D12 General with an Exceptional Deck (only available to him) whilst Austrians had a D10 General with an Average deck.
As a special rule (and under points system) the Austrians bought an extra Artillery Firepower card and the Prussians an extra Infantry Firepower card.
We both had 4 Brigades, Austrians having 3 Infantry and 1 Horse with 3 Guns (2 heavies which we will restrict to 1 max in future) whilst Prussians fielded 4 Brigades of 2 Infantry  and 2 Horse with 2 Field gun batteries in support.
As Morale pools the enhanced Austrians had 22 and Prussia 17 (more in this later however)

The actual game followed standard when playing the 'dice demon' with a seeming constant stream of rolls of 11 on a D12 against my low rolls with all dice types !
This was especially prevalent early on as Demon got a run of Artillery Firepower cards which dealt a wealth of damage to my units.
These weakened units then succumbed to charges and further shooting damage and soon I had several units destroyed and several routing with little damage caused in return.
A major cavalry battle occurred on my left which after some to and fro saw my units wiped out and the flank of my adjacent Infantry Brigade exposed.

It was however at this point that after a lot of losses I suspected that something was in error as my Morale Chip deck seemed never ending and upon checking I realised that I had 44 cards instead of 17 !!?? as I had used the SOB National Moral Points total (used as overall National Will level) in lieu of the battle total of 17.

So result as per SOB kind of screwed although it was certain Prussians would have lost decisively.
But this made the Post Battle rolls (for enhancing, degrading, pursuing or recognising units) impossible to work out correctly so we will restart campaign at later date.

Still it was as ever with FOB a fast flowing and exciting game fought to a definite conclusion.

Hopefully the game gave Stephen an insight into the SOB system and we can revisit at some point. 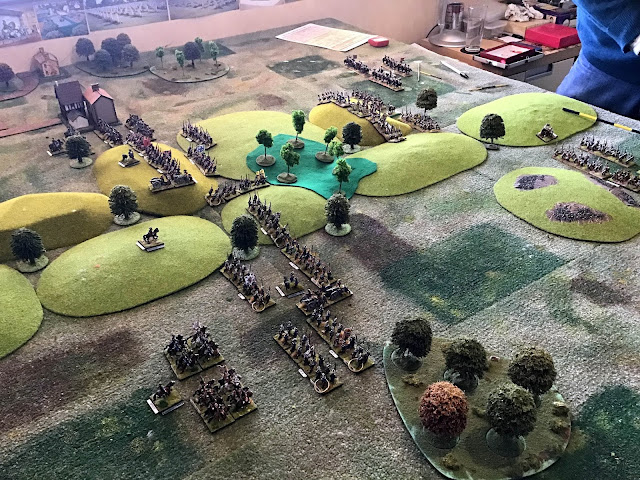 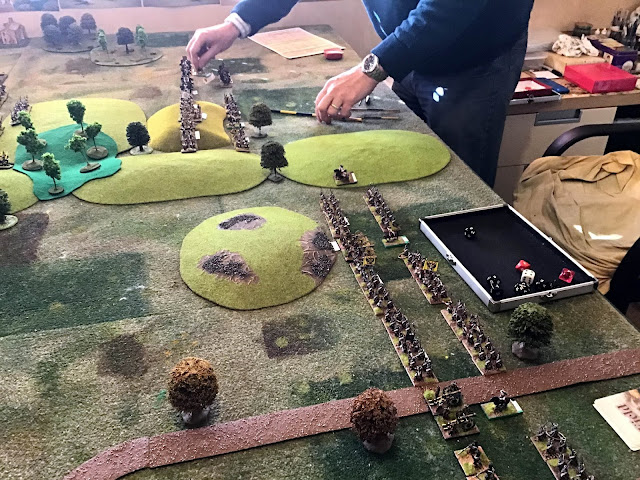 Infantry face off on central hills 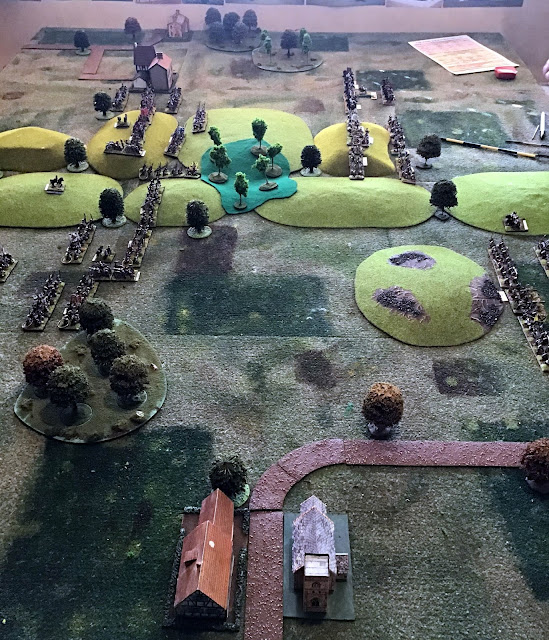 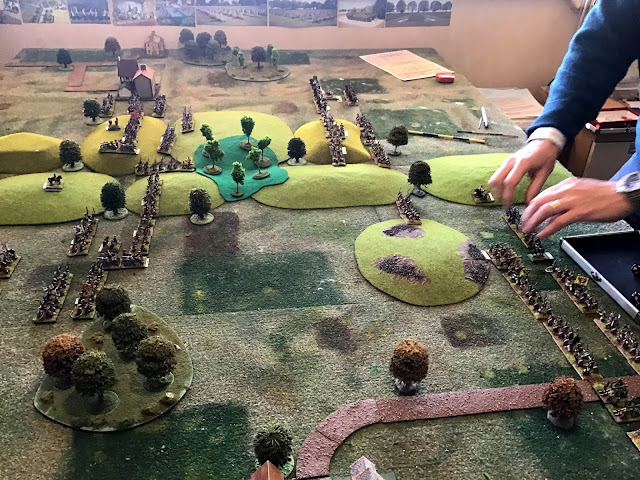 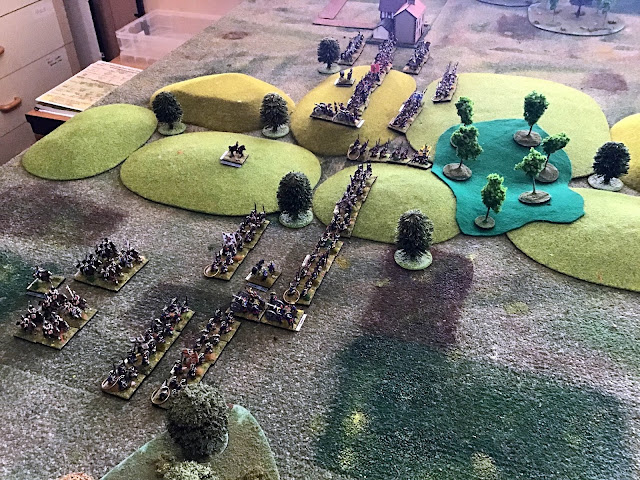 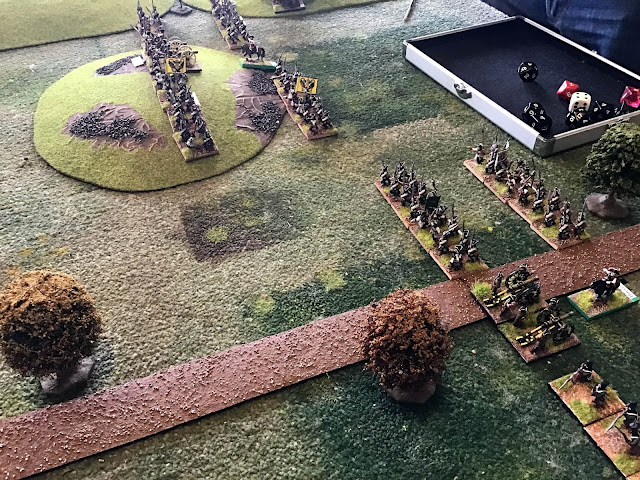 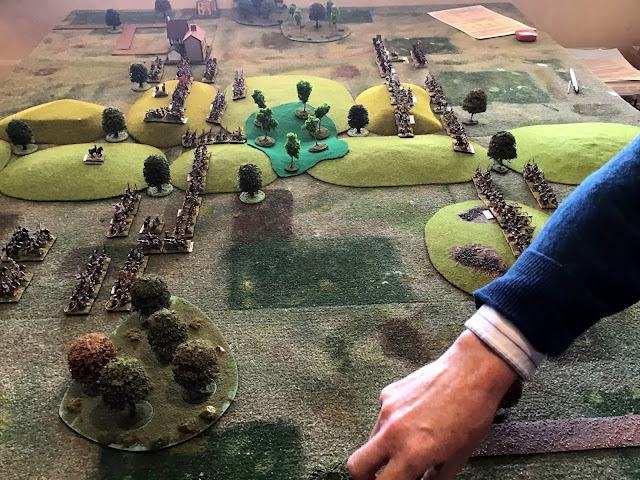 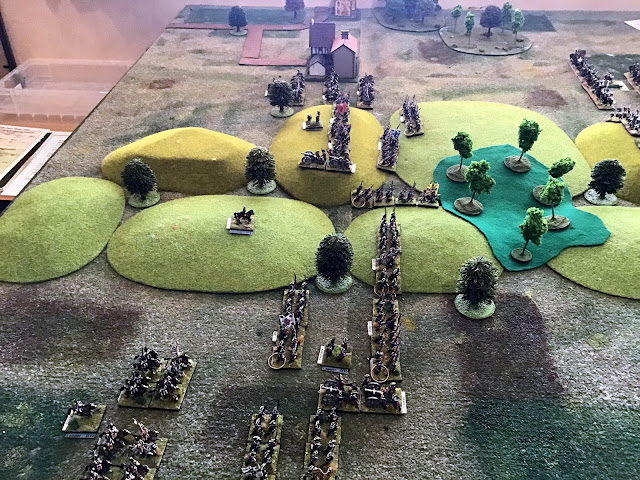 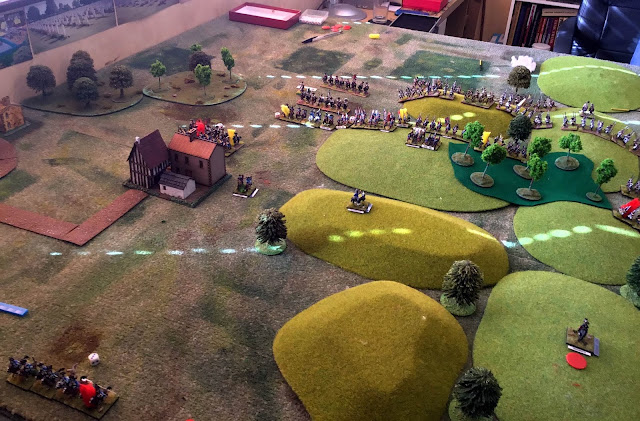 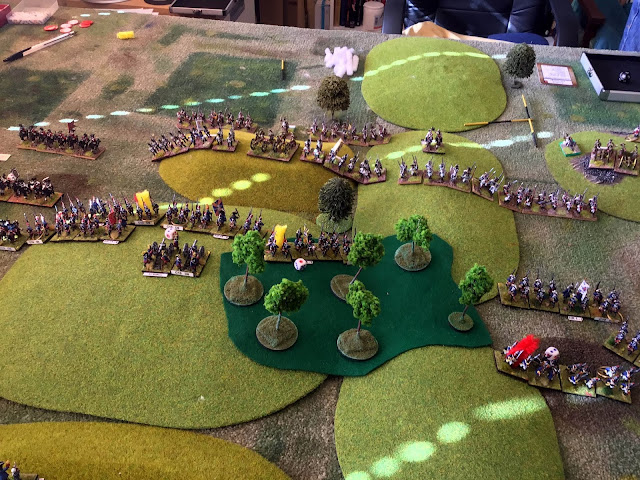 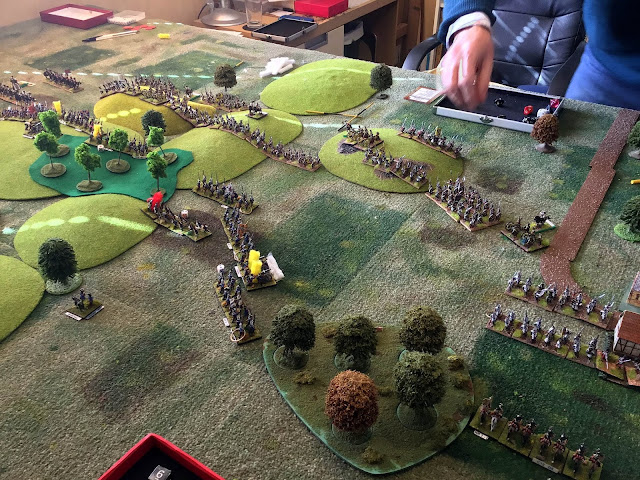 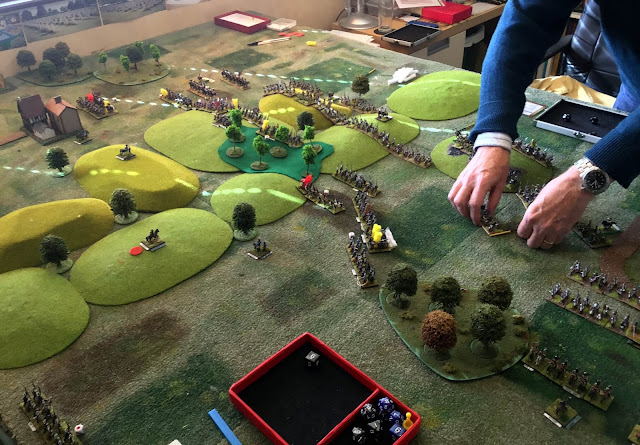 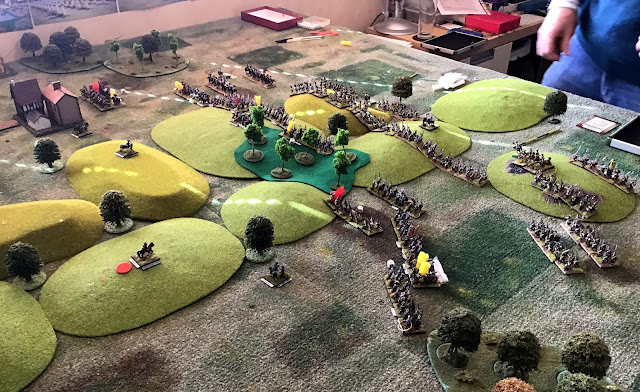 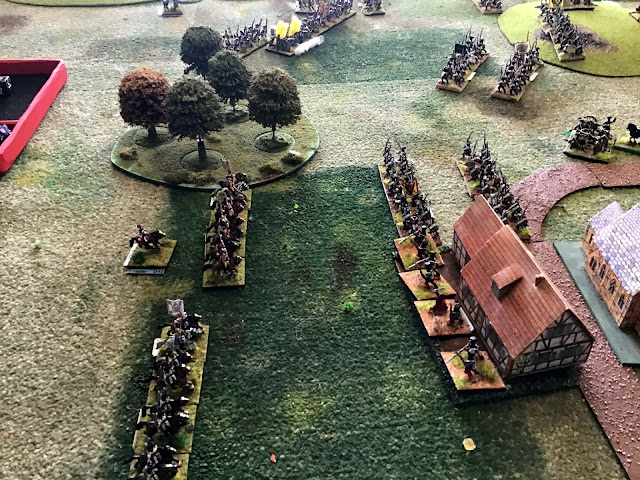 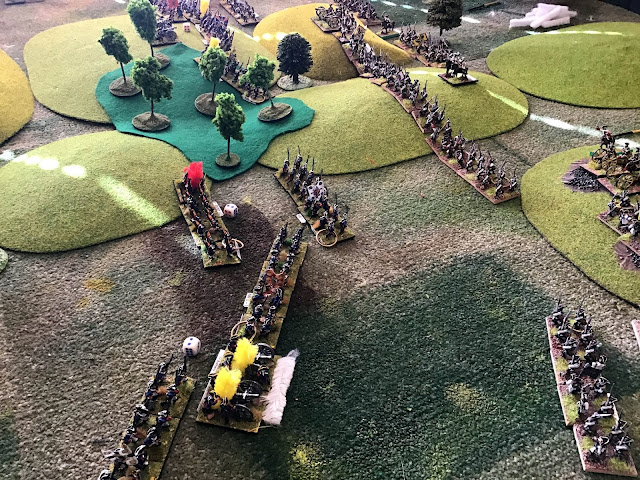 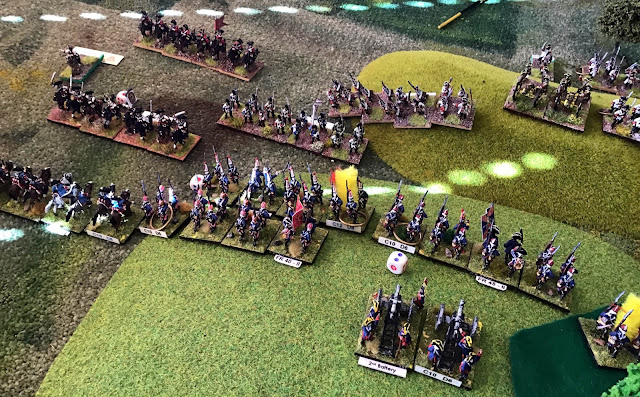 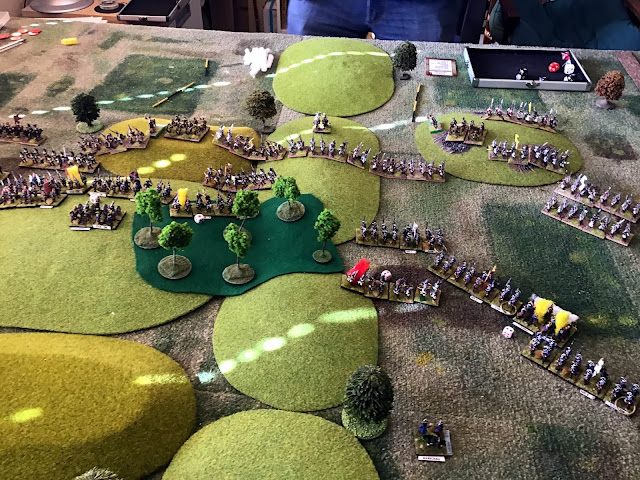 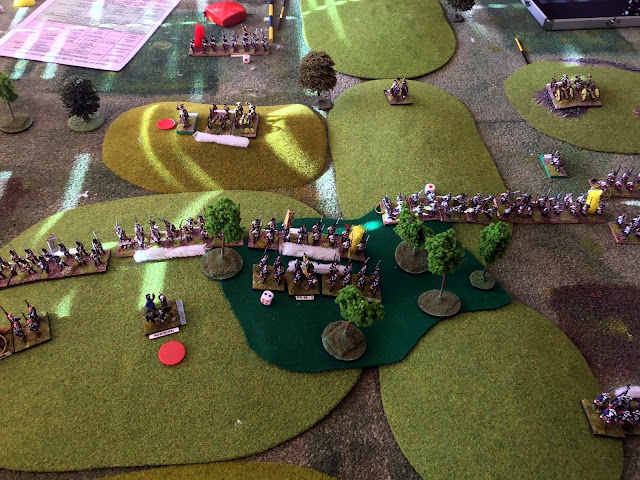 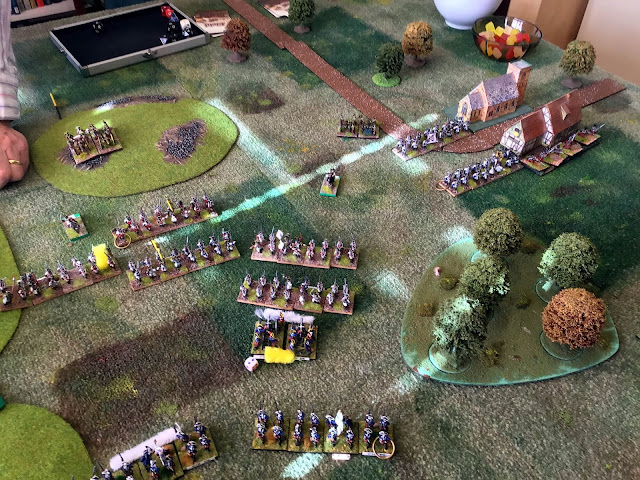 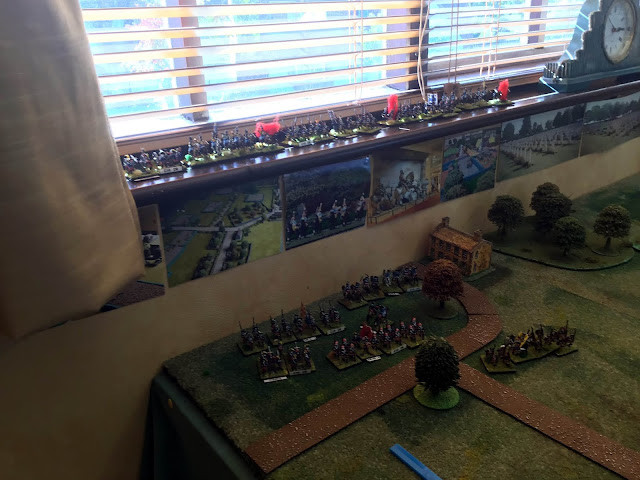 Rallied Prussian Grenadiers return to fray but alas too late 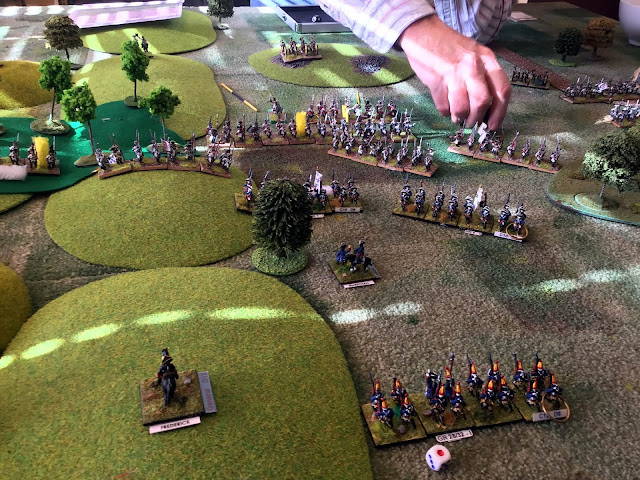 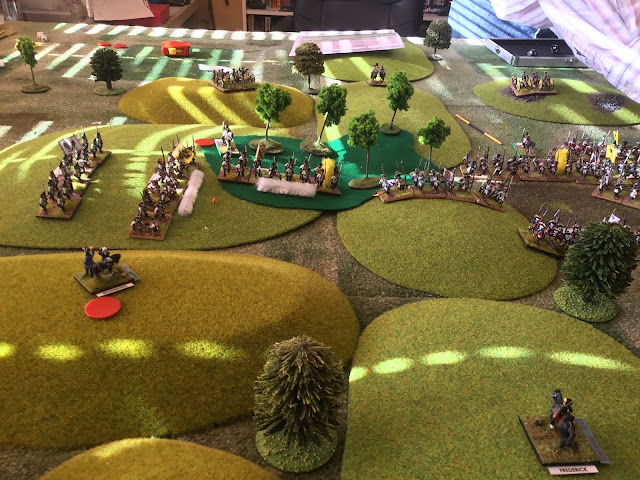