Dbmm 400 pt game using my Maurikian Byzantines vs Stephens Buyids.
Used 5th Feb draft of 1.1 (as we dont like 25/2 version)
Great game (as ever) with no Marching to contact as it turned out.
I massed 6 wedges of CvS/O with 2 Generals wedges lined in front with LhS/F and supported on flanks by Optimates and allied Khazar KnF.
Stephen had massed Inf in his centre mainly AxS with Ps support and a few BwO. Some Lh on his right and CvS behind his Inf on left.
Very little terrain (2 SH 1 GH and a W)
Despite being all mounted I ended up deploying first which was not ideal but did allow me to get forward quite quickly on first turn.
Byzantine wedges advanced against the foot blocks behind the Lh. Arabs advanced and engaged Lh ,to block Cv getting through. This worked for a turn but then Cv wedges got into contact along with Optimates. Very tough for both Cav and foot but we felt it seemed correct if Cav take on foot in such fashion.
Arab Lh surrounded and broken my allied Khazars (awful Pips) on my left whilst it was a stand-off on right as Arab Cmd had lowest Pip dice allocated.
Eventually the Byz Cv began to kill front ranks of foot but not fast enough as their wings emploded (looked like Cannae) and eventually succumbed with both flank Cmds broken and losses acrued on Cv cmds.
22-3 to Arabs with only 1 disheartened Cmd. But a lot closer than outcome as both Arab foot cmds 1-2 ME from breaking and if either had broken both would have due to -2ME morale effect causing break of whole army.
Close but yet again not close enough for Byzantines......
Initial deployments 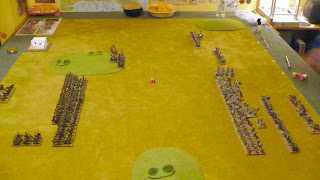 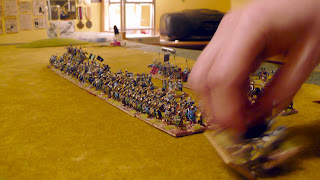 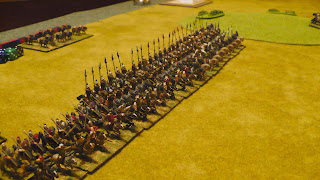