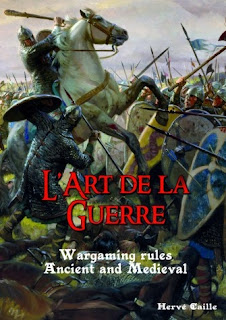 A whooping 3 games played at Stephens today with LADG !!!!!!

First game Stephen wanted to field his Samurai army so I used a Ugyhur Turk army with a Tibetan Ally (Cataphracts) being about as contemporary as I could field.
The Samurai Bow/Sword combo units are tough especially as Elite and they were able to shoot my Mediocre Foot troops up and kill their supporting Light Cavalry.
The mounted Samurai Bowmen are also tough as again Elite and mobile.
I did chase and kill a couple with some Tibetan Cataphracts but lost one in process.
A win for Samurai.

Next two games I used Vikings to try then in system and Stephen used Charlemagne Franks (not a great match up for Vikings).
My Army has a command of Elite Huscarls and two commands with Impetuous Medium Swordsmen supported by a couple of Berserker units (Elite MI) and a scattering of Light Infantry.
First encounter I Stephen chose to defend picked Plains and I placed a coast and then simply advanced in a long line 18 units wide.
Certainly a simple army to use !
But the Frankish mounted Lancer types are anathema to the Viking MI as they cancel their Impact and Furious Charge as well as having superior factors against the foot with Furious charge and Impact themselves.
This saw several Viking units lifted off in one turn as 2 hits sustained increased by 1 for Furious charge killing the weak MI and then the mounted are able to initiate flank attacks.
But it was something of a bloodbath on both sides and I did come within 1 break point of the Franks however I was also teetering on edge of abyss and duly succumbed when 2 units of Impetuous foot conformed into a Flanked position.

Second game the Carolingians used a Saxon warband ally and again chose to defend on Plains.
Again I obtained a coast and again advanced in a solid line as not really much else the foot army can do facing mounted.
Another bloody slog ensued with at one point 20 of my 23 units engaged in combat !
But again the MI simply withered in face of Lancers (nearly impossible to kill these).
Once more both sides bruised and battered quickly but the Lancers just too much for Vikings who where sent packing to their longships once more.

Viking actually quite fun to use as they all get to fight but the MI version simply outclassed facing Lancer types.
A tweak to try HI Swordsmen with Irish warband in the offing as HI more durable and no Impact or Furious charge to lose. 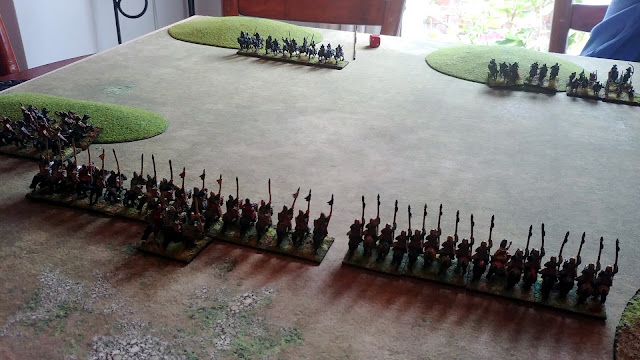 Turkish foot (the weakest link) hide behind a gully 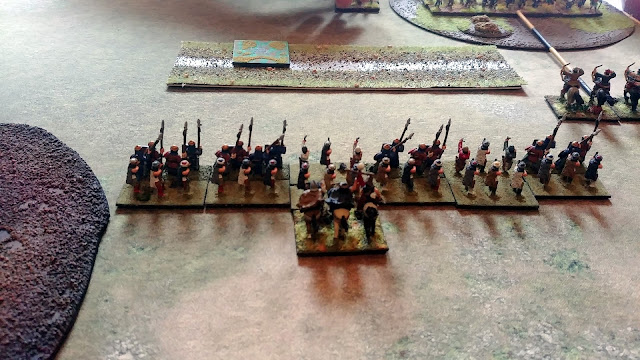 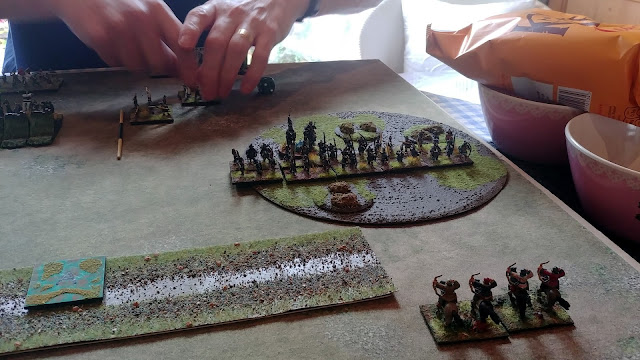 Viking advance with sea on their left 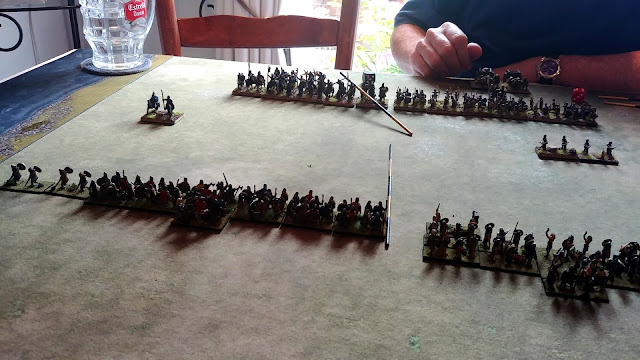 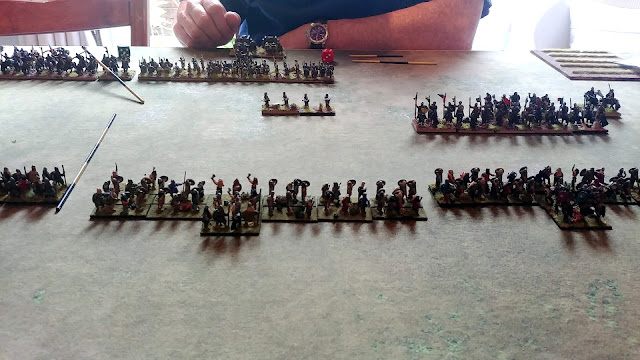 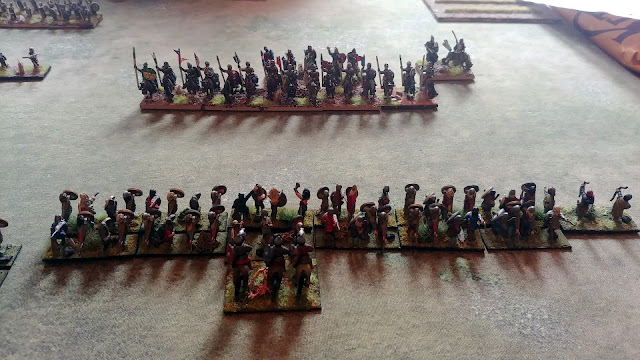 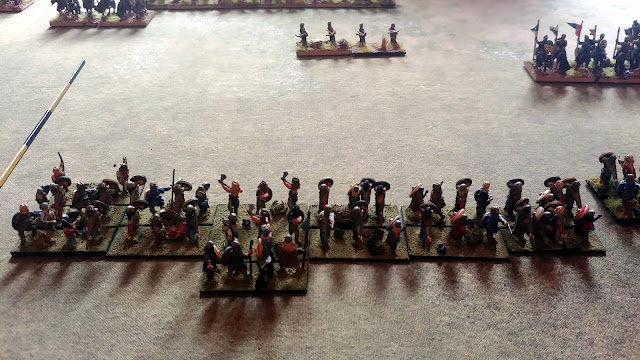 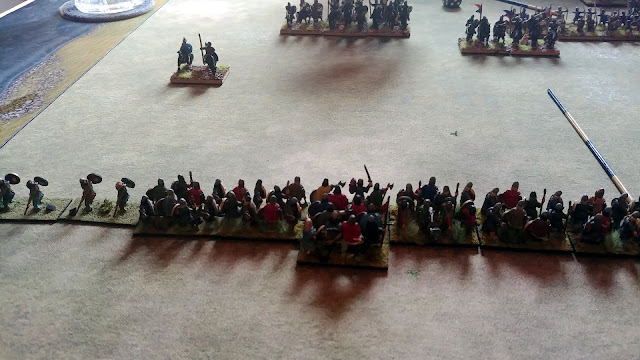 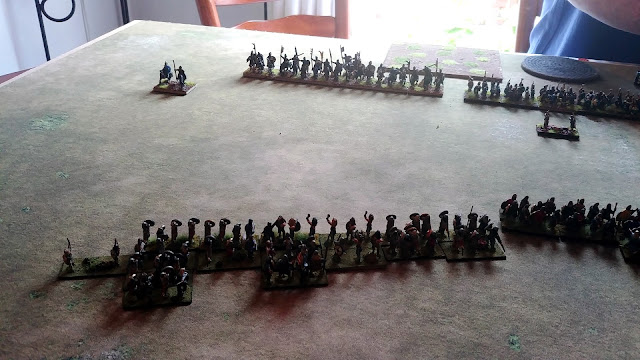 Huscarls in center this time facing Saxons and some Spearmen 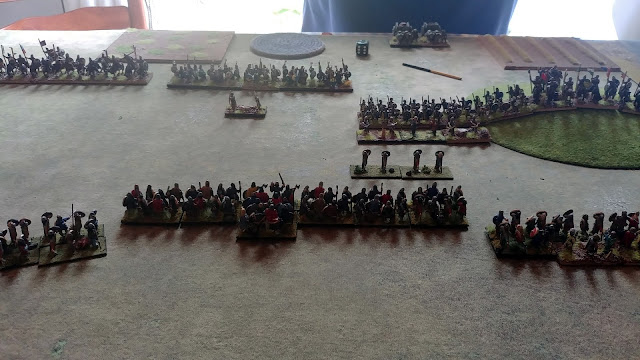 Hugging the coast again but those Lancers caused havoc 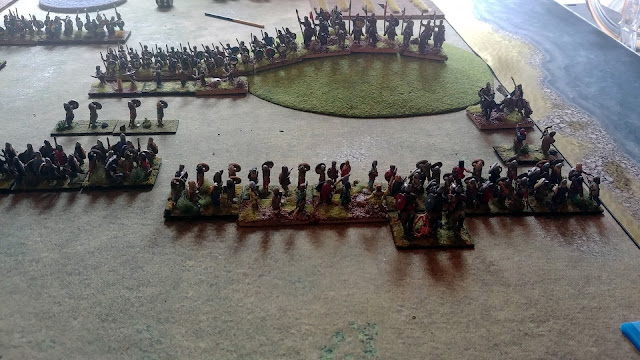 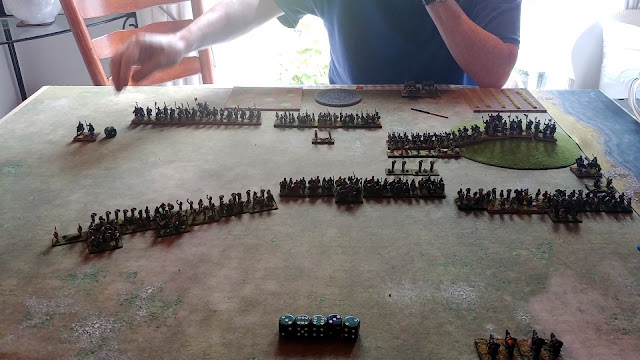