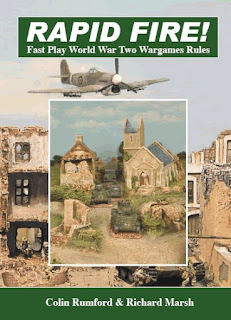 Played Cristot scenario from Normandy Battlegames book today at mine with Stephen and again using Rapid Fire II.
Scenario designed for the rules but couple of unclear/inconsistent items in OOBs had us head scratching at start as not sure what size the 12th SS Recce Battalion starts at ? 1 Company or 2 ? and whilst a Panther is mentioned in scenario outline it is missing from OOB (but we decided it was an omission).

Stephen fielded the SS and I blooded some newly painted (yes indeed folks I have managed to paint some figures !! 100 to be exact !) British Infantry.
I bought a 15mm Late War Platoon pack from Forged In Battle several years ago as I really liked the figures but they have languished unloved until last week.

Game was rather enjoyable, at least until my Artillery got a lucky hit on the Panther and brewed it which led to much wailing on Stephens part !! now he knows how it feels :-)

Artillery and indeed the whole 'damage' model in RF is rather 'lucktastic' but it works within the framework and fast play/decisive aim of the rules.
To get more granularity/detail a different but correspondingly slower set required.

Spotting the enemy as attacker is the main problem but anything that does expose itself is of course a magnet for Artillery (I had a 'full' Regt of 4 x 25pdrs so potentially potent).

In Normandy both sides access their Artillery on anything but a 1, but Stephen (thankfully) failed to bring his (2 x 105mm) in on several occasions (good to see dice demon suffer for once !).

Even so his Artillery (including a nasty on board 150mm) did inflict Morale checks on one of my 3 Battalions causing it in its entirety (this takes a bit of getting used to) to be Suppressed (essentially skip a turn) several times even though only minimal casualties.

Mortars are quite potent too as they tend to hit more often than Artillery, and cause a drain of casualties, but do not cause Morale Checks.

For Normandy this all seems pretty plausible stuff overall.

We managed to play 9 out of 16 turns (too much waffling about rules and other stuff as usual) and we both lost a Battalion each to Rout but game still in balance.

I am warming to RF for large games but still think that Panzer Grenadier Deluxe is my favourite overall (and look forward to release of 'O Group' by Dave Brown later this year).

The battlefield from German lines 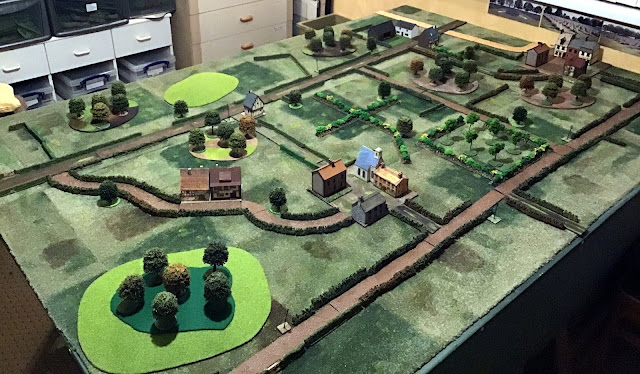 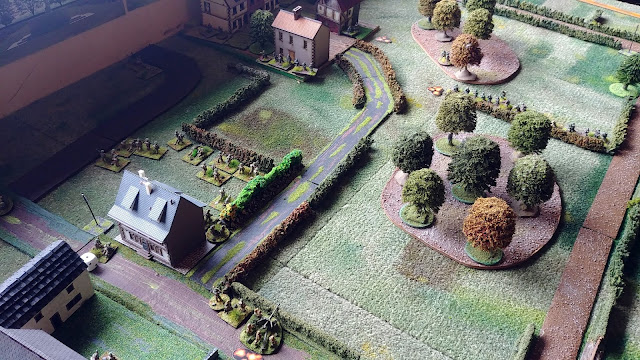 Dragoon Guard tanks maneuvering (the Firefly lucky to survive a hit from Panther with only Light Damage). Green Howards Battalion arrives in support around Hill 102 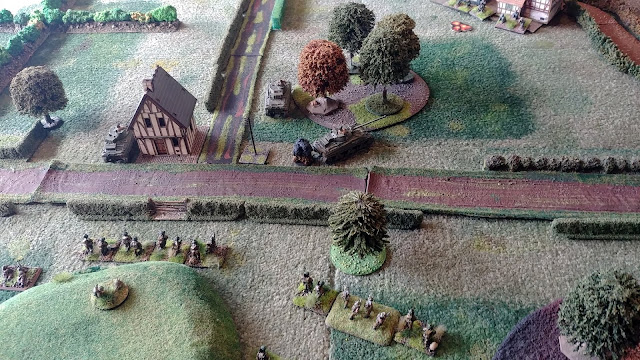 The dagger plunged into SS heart !! 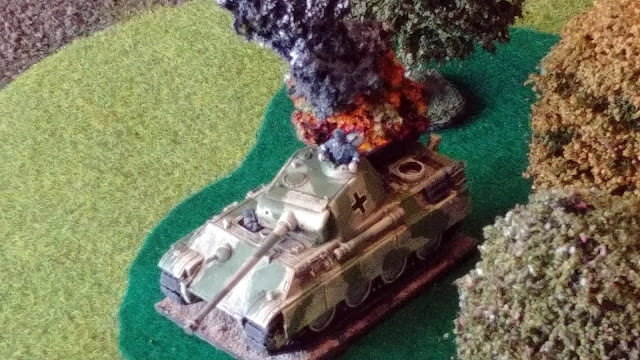 But 12th SS Recce holds the town and church steeple 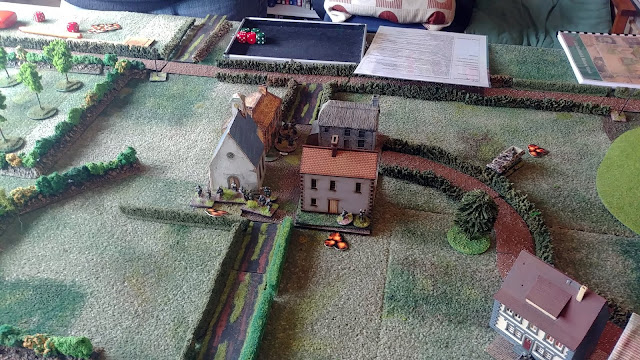 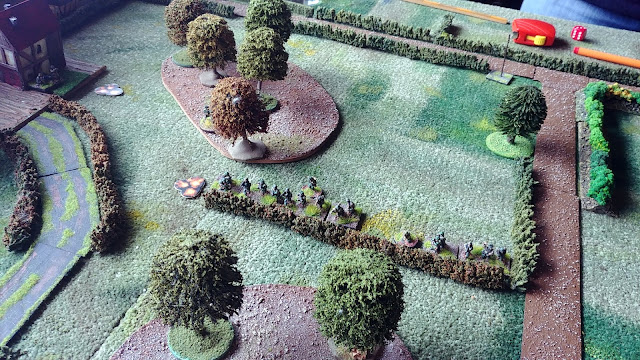 Tough to whittle Elite troops out of built up areas 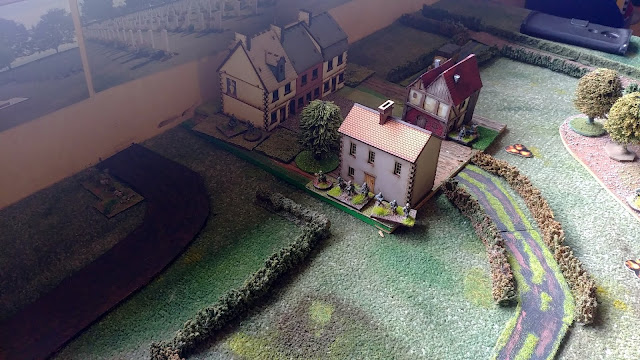 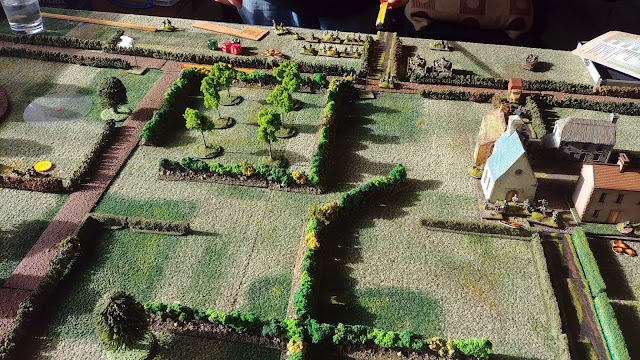 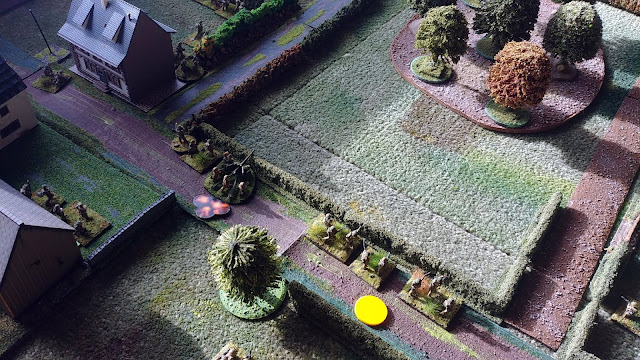 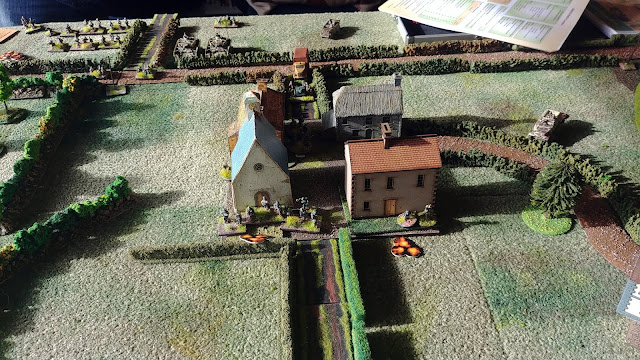 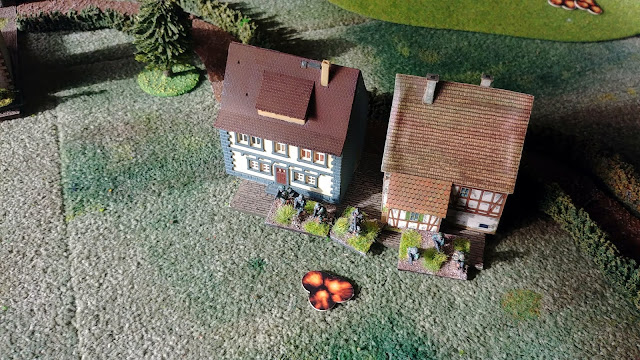 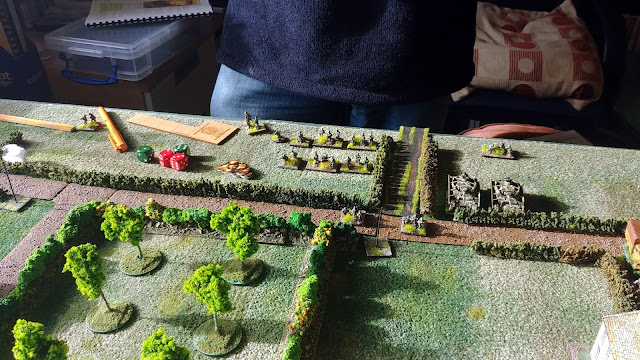 The secret to renewed painting splurge a cheap 'Optivisor' from Amazon, which means I can again see figures sufficiently well to paint to reasonable standard.
The pains of growing old, but sexy too eh ?? 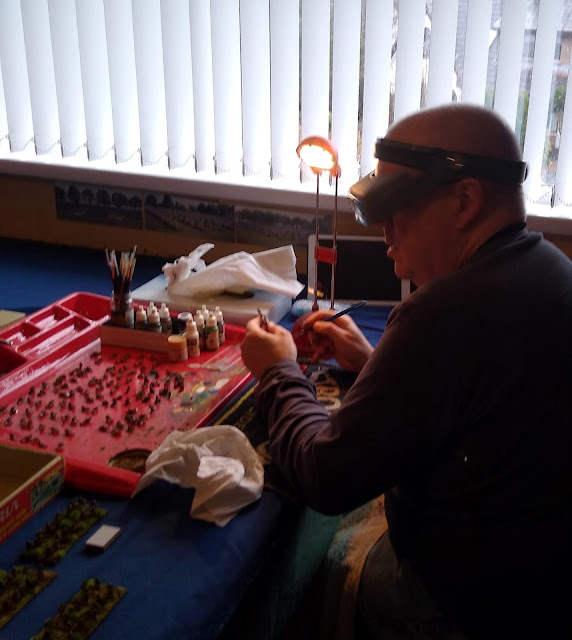